The Lessons of Egypt 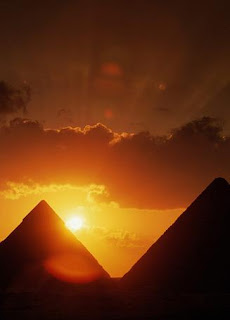 I won't pretend to have profound insights into what is going on in Egypt. But I think what went wrong was that they failed to have a complete structure for what is called [sometimes laughingly] a "democracy."

Lord knows, we in the US have no right to lecture anyone else about how to get it right. After all, it's been only a week or two since we have begun, under our constitutional structure, to recognize the full rights of people who are gay. We have a long way to go to have a society that fully recognizes everyone, including LGBT people, as human beings with equal rights to everyone else. It's only taken us a mere 250 years or so to get this far.

What we did have was the concept of a structure of how to go about building a democratic form of government. That's not to say that it leapt, like Athena, from the forehead of any god, but it came first by crippling the ability of any one person or any one group of persons to seize the reins of power, by splitting up government into three [more or less] equal institutions. Shortly thereafter we created the Bill of Rights, the sole purpose of which was to protect each and every minority from the "Tyranny of the Majority." Not that it worked originally, as our bloody Civil War demonstrated. And there are no dearth today of advocates, like Justice Scalia, of the right of the majority to impose their bigotry on anyone and everyone.

I suspected that things in Egypt would not turn out well when the Islamists rode roughshod over their opponents during the writing of the constitution. Of course, you can't have anything resembling a democracy in Egypt unless the Islamists are represented, perhaps as the majority. But when the very form of government favors one group over another, you are bound to have trouble.

Egypt was an incipient democracy that failed. Whether the Army was right to step in or, more importantly, whether its intervention will turn out well, is still to be seen.

I only hope that all the people of Egypt wind up better from whatever eventuates.
Link - Posted by John Pieret @ 10:28 AM

Comments:
Democracy in USA grew out of earlier experience in England, where many mistakes were made

The mistakes of recent years, including Egypt and Iraq, have been to assume that you can create democratic government with a constitution. Experience should have shown us that it needs to be deeply ingrained in the culture. At present, Arab culture is not close to being ready for anything approaching democracy. We should not be surprised to see turmoil.

If we are honest, we will admit that democracy has only a tenuous foothold in the USA.

If we are honest, we will admit that democracy has only a tenuous foothold in the USA.

And, no, just having a constitution won't get you there either. There has to be both a constitution and the "will of the governed" to respect and enforce it, no matter how imperfectly. But if the constitution is hijacked in the first instance, there is no hope.

We all know Churchill's famous assessment:

Although I have to confess to a fondness for:

The best argument against democracy is a five-minute conversation with the average voter.

The problem with democracy is that it only works if all participating parties believe it can be made to work.

Unfortunately, it can be usurped by unscrupulous groups, like the Nazis in Germany, who see it only as a stepping-stone to power, power that, once gained, will not be willingly surrendered. I suspect this may be true of the Muslim Brotherhood in Egypt.

One thing Egypt has shown is that the present president of the USA and his representatives in Eygypt either haven't got a clue or are out to damage the USAs reputation for supporting freedom (yes that was/is the reputation it had/has out here).

The Egyptians aren't stupid, even when electing Morsi they thought it was the better of two evils, the USA threatens to stop funding the Egyptian military and Russia has already offered to fill the gap.

Not sure what has gone wrong in the USAs foreign policy, but your present rulers appear clueless and careless of their citizens lives.

It is a shame, the USA was great, not nice and not always fair, but seen as an honest broker on the side of the oppressed. Not so much anymore