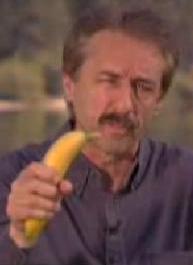 Via James McGrath comes a word new to me (ain't learning grand?). On the other hand, the word means, approximately, someone who refuses to learn.

And who can exemplify a refusal to learn better than the BananaMan himself, Ray Comfort?

There was the amusing incident where PZ Myers tried to educate him and he almost got a glimmer of what science has shown but then the ol' mumpsimus closed in again.

Of course, Comfort is going to perpetrate yet another, perhaps more spectacular, example of the term. Comfort is about to release a "movie" entitled Evolution vs. God. For reasons not entirely clear to me, PZ and a number of other scientists allowed themselves to be "interviewed" by Comfort. PZ has posted about it here and here.


He started by asking me for evidence of evolution. I tried to explain the evidence for speciation in sticklebacks, but he asked if they were still fish, and when I said they were, he said that didn't count because they didn't become a different "kind", like a dog becoming a cat. So I told him that doesn't happen in a single lifetime, and that carnivores diverged over 60 million years ago. I suggested he look at fossils, but he rejected that, because he wanted "observable" evidence, and anything that happened millions of years ago isn't observable. So I said it was, too — fossils and molecular evidence are observable.

So the usual creationist run-around, where he defines what evidence he'd find acceptable by rejecting historical evidence as nonexistent, and contemporary evidence as too trivial.

Maybe "mumpsimus" is too polite and we should just go with "idiot" instead.
Link - Posted by John Pieret @ 8:04 PM

Comments:
There is a Wikipedia article on "mumpsimus" which traces it to a story told by Erasmus, and possibly further back.