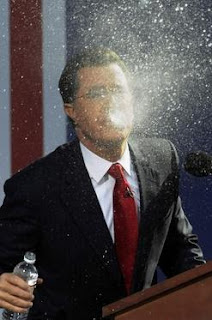 The Muncie Star Press has a story on Ball State's hire of Guillermo Gonzalez.

Gonzalez says that he plans to continue his research on astrobiology and stellar astrophysics but will not be discussing intelligent design in the classroom.

The article has a fairly balanced account of Gonzalez' misadventures at Iowa State University. Of course, Gonzalez is still claiming that he was "Expelled," when, in fact, he failed to measure up to his peers.

Be that as it may, what interests me is this bit of chutzpah:

"Using 'intelligent design creationism' as a supposedly neutral label is like using 'pro-abortion' as a neutral label of people who label themselves pro-choice," West said.

These are the same people who call the vast majority of scientists "Darwinists" and blame "Darwinism" for every bad thing since 1859, including Nazism, Communism, Stalinism, Pol Pot and everything else they can imagine.

On the other hand, they try to limit "creationism" to young-Earth creationism based on Biblical literalism. Of course, Judge Jones, a conservative Republican, was able to see through that ploy.

And then West lets the latest cat out of the bag when he says that the concepts Gonzalez focuses on in his papers are things like "the Galactic Habitable Zone, fine-tuning, and the number of factors required to make life possible." All are ID "talking points." So, he won't be discussing intelligent design in the classroom but what do you want to bet he will be discussing the "controversy"?

Fasten your seatbelt, Ball State. You're in for a bumpy ride.
Link - Posted by John Pieret @ 6:35 AM

Creationist is a good buzzword for someone who wants to teach their religion as science in the publics schools. Intelligent Design Creationist is an accurate usage.

Creationist is a good buzzword for someone who wants to teach their religion as science in the publics schools.

Of course, context counts. We've previously discussed whether or not "theistic evolutionists" are "creationists" and, in a broad sense, I think they are. So are Deists.

But, in the context of public school education, few, if any, theistic evolutionists would seek to inject their religious beliefs in science classes and, therefore, are not creationists in that sense. Despite all their dissembling, the IDers want to inject their religious beliefs into public school science classes and they are creationists for those purposes.