Where Have All the Young Brides Gone? 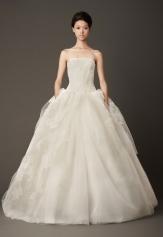 This is more in Ed Bayton's remit but I could not resist.

Via People For the American Way's Right Wing Watch comes word of the assertion by Jennifer Thieme, of the National Organization for Marriage's Ruth Institute, that, in states that recognize same-sex marriages, "no woman gets to be a bride and no man gets to be a groom."

Boy, is Vera Wang going to be surprised!

Thieme is actually complaining about the position of some Libertarians that the government should 'get out of marriage.' But she can't help but bring the crazy:


First, I do not think it is realistic to believe the government will actually get out of marriage, especially once the definition of marriage becomes sexless (genderless) as a widespread policy. Sexless marriage as a policy is what must happen in order to allow gay couples to marry. It wasn't fair that only straight women could be brides, and only straight men could be grooms. So now no woman gets to be a bride, and no man gets to be a groom in same sex marriage states.

Does anyone need the imprimatur of the government to be a bride or groom? In any case, as one of the commentors to her article points out, states that allow same sex marriages generally allow marriage license applicants to describe themselves as "bride," groom," or "spouse."

But fasten your seat belts and try not to get whiplash ... her next sentence is:


The state will not likely give up the increased power it gets over individuals, children, and the church as this change gains traction.

Allowing same sex marriage gives the government increased power over individuals, children, and the church? How, exactly? Thieme leaves that part out because it is bullhockey.

Then she asks "How does gay marriage affect YOUR marriage?"

What would a wingnut screed be without a vague and unverifiable anecdote?


I've encountered honest, far-left leaning Democrats who admit that sexless marriage is the destruction of traditional marriage. They admit it, point blank. One even likened it to slavery. This is not how it gets marketed to voters. Voters are told that marriage is simply being expanded to include gay couples. Expanding marriage vs. eliminating traditional marriage are two very different things.

Of course, to Thieme, anyone left of Attila the Hun is "far-left." But the interesting thing is that even this supposed anecdote lacks any explanation of just how same sex marriage results in the destruction of traditional marriage.

Why, it's almost like they have no such explanation!
Link - Posted by John Pieret @ 10:40 PM

Sorry, Dennis, I'm not in the mood.

Is he still around?

Looks like the only trope, or tripe (in the vernacular of my day) she missed out was that it is all caused by teh evilutionists.

Is he still around?

Yeah, though not as ubiquitous.

Why not? After all, they claim that the other other bad things they blame on Darwin resulted because he undermined "traditional religion" and what is more traditionally religious than bigotry against gays?

It's funny that nitwit referring to "sexless marriage" when you just know she knows married gay folk are busy right now having gay sex and that she finds that tremendously 'icky'.

And it's not exactly like "sexless marriage" is unheard of among heterosexual married couples. There's a reason it's a staple of comedy.