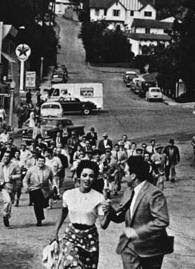 If you were wondering why the wingnuts are driven to such panic by gays, it appears that they got ahold of a copy of Invasion of the Body Snatchers and thought it was a documentary:


Linda Harvey of Mission America explained today that gays and lesbians are attracted to people of the same-sex because they are empty inside and seek to "absorb" the personalities of others. "Those who have left homosexuality," Harvey said, talk about how "they've once felt empty" and as a result want "to absorb the personality and identity of another person, even someone of the same sex because the vacant feeling inside is so great." "When others seem to have meaning and purpose, the feelings of self-pity can be overwhelming," she continued.

Just imagine what a state they'll be in if they ever see Aliens.

Dennis, you are no one to accuse others of being easy. It would be easy to tip off your local police. Do you really want to spend some more months under involuntary treatment?

we really think you are piece of crap

and threaten us again

Well, "we" think you are a sad, damaged human being who is to be pitied. But if you make yourself more than the minor, silly, nuisance you are now, I may have to do something about it, though I'd feel bad about it.