The ICR and Babel 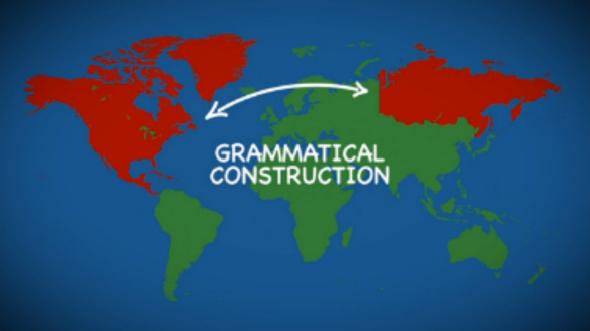 Peter, the Kiwi student who reads the Institute for Creation Research babble so you don't have to, has an amusing example at his blog, Eye on the ICR, involving an ICR video trying to explain language distribution with the story of Babel.

The facepalm moment comes when the video gives the above illustration and says:


The Yeniseian language family in Siberia, and the North American Na-dené language family share the same grammatical construction – and they're on opposite sides of the planet.

The video does go on to say that the two language groups are related and probably separated when people crossed the Bering Strait land bridge during the ("post-flood"!) ice age. But as Peter points out:


I thought they were trying to show that languages were different, not that they are similar and related even above the family level? What they should see is around 70 distinct language groups that have no genetic relation to each other, not that they came from even earlier groups.

For all the details and the ICR video, drop by Peter's place.

Comments:
That sets some standard for confusion. Beginning with Siberia and Alaska supposedly being on opposite sides of the Earth - whatever that, even if it were true, would have to do with anything - and then that jumble about Nimrod. It's the sort of thing which defies any attempt to understand, much less talk about. But I have to mention a few languages which are known as "isolates" - they have no (known) relatives: Basque, Burushaski, Sumerian. BTW, although the Sumerians did live in the Ancient Near East, there is no mention of them in the Bible. This caused some problems when their civilization was discovered in recent times.
And I can't resist wondering: Where in the Bible does it talk about people migrating from Siberia to Alaska?

They should rename the ICR the Institute for Cherry Research since that's what they spend most of their time a-pickin'.

And I can't resist wondering: Where in the Bible does it talk about people migrating from Siberia to Alaska?

Strangely, God seems to have forgotten to mention the Americas at all.

And I can't resist wondering: Where in the Bible does it talk about people migrating from Siberia to Alaska?

Strangely, God seems to have forgotten to mention the Americas at all.

True, but according to some he made up for that shocking oversight in The Book of Mormon.

I know how he feels.

I live in eastern Washington, yet in a very odd twist, Seattle Washington, which is almost entirely around the globe from us, is considered to be part of the same state.

It's an astonishing fact.

It's proof that flat-earthism isn't dead.

If not through design, at least by extreme incompetence.

I couldn't see Siberia (or any of Russia for that matter) from my house without binoculars, a whiskey toddy and a strong dose of pareidolia but the key is to look eastward, not westward. Sheesh.

I used to live in bush Alaska (west coast of Alaska, Yup'ik population).

Sounds interesting! Sometime have another whiskey toddy and tell us about it!