When the Babble Boggles! 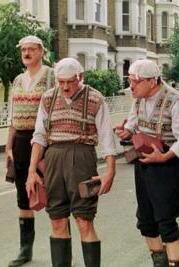 It is hardly unusual to run across wingnuts making irrational arguments, especially at Alan Keyes' RenewAmeica website. But I defy you to make any sense at all of this from David Usher of the Center for Marriage Policy.

Usher's contention is that the:


U.S. Supreme court declared DOMA unconstitutional because defenders of heterosexual marriage never argued that gay marriage is unequal and unconstitutional. The Left screamed "equality" in every court in the nation. We never responded on the merits, were unable to state harm, and suffered an entirely preventable loss. ... It is possible to reverse the rulings and protect state constitutional bans if we lead with strong equality arguments in our briefs and in our public work on the cultural front.

Okay, Usher is going to show us how denying gay marriage actually results in greater equality ...


Heterosexual marriage is the only constitutional form of marriage because it is the only possible arrangement that automatically confers equal social, economic, and parental rights to all married men and women regardless of one's ability to naturally bear a child. Same-sex marriage immediately bifurcates these rights, destroying equality between men and women.

Usher states that there are now three types of marriage:


Class 1: Mother-mother marriages: The class of marriages having most advantageous rights is marriages between two women. When two women marry, it is a three-way contract among two women and the government. Most women will bear children by men outside the marriage – often by pretending they are using birth control when they are not. Entrapped men become economically-conscripted third parties to these marriages, but get nothing in return.

This is a significant advantage compelling women who would otherwise become (or are) single mothers to choose to marry a woman instead of a man.

Riiight! Most straight women will marry other women just to "entrap" men into supporting their children. Wut? Why can't they do that as single women?


They can combine incomes, double-up on tax-free child support and welfare benefits, decrease costs, and double the human resources available to raise children and run their household. They are sexually liberated with boyfriends often cohabiting with them to provide additional undeclared income and human resources without worrying about what happens when they break up with their boyfriends.

Wait! If they are legally married their combined incomes will reduce or eliminate child support and welfare benefits. Sure, they will decrease costs but is that enough to get women to marry each other in any significant numbers? Can't they do that just by being "roommates"? And if they want to have boyfriends cohabiting with them to provide additional undeclared income and human resources, why do they need to marry each other?


Today, approximately 25% of single mothers cohabit with an undocumented boyfriend. Same-sex marriage allows women to double-up on everything, establishing sub-rosa polyandrous marriage as a common legal institution with men as peripheral servants without a stake in marriage or society.

But ... but ... why would men willingly become "peripheral servants"?


The Supreme Court cannot explain away the unconstitutionality of same-sex marriage when the welfare state becomes a predatory, automatic, and unnatural statutory third-party-provider to a class of often structurally-polyandrous marriages, extracting substantial income from taxpayers and entrapped men, that other marriages do not qualify for.

Can anyone provide a babble to English translation? Maybe this will help:


Class 2: Heterosexual marriages. The second class of marriages is traditional marriages between men and women. Children of these marriages are almost always borne of the marriage and supported by husband and wife without governmental involvement. In these marriages, men and women have natural parental and economic rights, standing in society, and equal "gender power" before the law. Traditional marriages will be economically-disadvantaged compared to mother-mother marriages because they cannot draw large incomes from the welfare state and they will be taxed to support other marriages. They are treated in discriminatory fashion having to subsidize Class-1 and perhaps Class-3 entitlements (including ObamaCare) in their taxes.

Ummm ... why can't men and women do the same thing as women-women can do, establishing sub-rosa polyandrous marriages with extra boyfriends and girlfriends acting as willing "peripheral servants"? Why can't men and women game the "welfare state" just as well as two women can? Is the whole premise of Usher's argument that men are really, really stupid? In which case, why should we listen to the Y-chromosome challenged Usher at all?

But the funniest of all is this:


Class 3: Male-Male marriages. Marriages between two men are destined to be the marital underclass. In most cases, these men will become un-consenting "fathers" by reproductive entrapment. Men in male-male marriages who become fathers by deceptive means will be forced to pay child support to women in bi-maternal marriages, and become economically enslaved to Class-1 marriages. The taxpayers will be guarantors of child support collections for low-income fathers who cannot afford to pay (as occurs in the existing welfare state).

Update: Ed Brayton has also seen this and his commentariate leans toward an explanation that Usher is less homophobic than misogynistic. Interestingly, Usher had an earlier screed that, if not anymore intelligible, is more transparent:


Forget the terms "same sex" and "gay" marriage. These are victim-based marketing ploys invented N.O.W. to send us off into a heated debate about homosexuality and equal rights — distracting us from seeing their real goal of establishing "feminist marriage".

It seems Usher expects straight women, in large numbers, to marry each other to game the system:


Feminist marriage will be far more attractive to all women than heterosexual marriage. Sexual orientation does not matter when two women marry and become "married room-mates". They can still have as many boyfriends as they want, and capture the richest ones for baby-daddies by "forgetting" to use their invisible forms of birth control. On average, a feminist marriage will have at least four income sources, two of them tax-free, plus backup welfare entitlements.

This is thinking far more bizarre than is needed to be an average run-of-the-mill wingnut. Usher is an uberwingnut.
Link - Posted by John Pieret @ 6:34 PM

the end of effective social movements

how we won the James Randi Million Dollar Paranormal Prize

Who let the Dennis out? Woof! Woof!

I didn't know Dennis was interested in, much less against, marriage equality. Oh, it's Dennis isn't it? He's just randomly posting his drivel.

Usher's rant reminds me of those notorious cases where heterosexual couples produce large broods and then live comfortably off all the benefits. Are those grounds for banning heterosexual marriage?

Is David Usher's (and others) wingnuttery grounds for banning evangelical Christianity?

Good grief, but that's gibberish above and beyond the call of wingnuttery. It could only be less coherent if it met the technical definition of "random".

It does, though, seem to me to echo a bit the idea of the slavers that slavery of black people was necessary to secure equality among white men. I suspect that's just a matter of my pareidolia imposing meaning on that lunatic stew.

Dennis, that's the first time I've seen you post something close to a complete and coherent sentence. You're in no position to call others babblers.

Over at Ed Braton's place a number of people think that what fuels Usher's babble is misogyny. He seems to assume that women will game same-sex marriage to oppress stupid males (like Usher).

I wish Usher's argument came with some kind of illustrated flow chart.