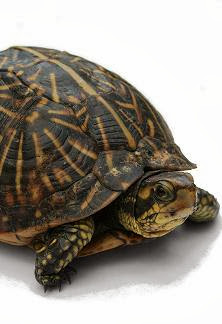 At the risk of trampling on the Sensuous Curmudgeon's territory, here's a bit of Creationist Wisdom from a certain Lee Harvill, of Meadows Place, Texas:

This is the fun part:

Except ... wait for it ... there are animals with three-and-a-half chambered hearts. They are called "turtles":


Turtles are a curious transition — they still have three chambers, but a wall, or septum is beginning to form in the single ventricle. This change affords the turtle's body blood that is slightly richer in oxygen than the frog's.

I do hope TomS isn't being serious. Why not a 1.25-celled creature or a 1.78344-celled creature? My suspicion is that once cells became life's "unit of issue" creatures have since come in whole cell counts. ;-)

No, I am not being serious.

Although I have seen a creationist question the evolutionary origins of multicellularity, I don't think that they phrase it in quite so obvious a way.

So now we can add oilfield roughnecks to dentists, engineers, lawyers, etc as experts in evolutionary biology.

He has a point, though. What use is half a brain, for example?

However, he saves his most startling claim for last:

I am of the opinion that if the facts and the theory are presented in an objective manner, then the theory of intelligent design, which Darwin advocated, will take care of itself without even being mentioned.

Darwin was an advocate for Intelligent Design? Has anyone told the Discovery Institute? Is his name on the list of scientific dissenters from his own theory?

So now we can add oilfield roughnecks to dentists, engineers, lawyers, etc as experts in evolutionary biology.

Of course, the difference between me and Casey is that I know and acknowledge that I'm nothing but a fairly well versed amateur (compared to most Americans) and don't go around trying to "debunk" actual scientists' work (though I'll smack 'em around on subjects they are equally amateurish at, like philosophy).

Actually, the fictional character that comes most readily to mind when I think of CL is Uriah Heep.

Thanks for all your work trying to keep the world sane.

Obviously a silly letter. Unfortunately people like this are seeking to control the biology textbooks we provide to our children in Texas.

On a science point this may be an interesting case of "converging" evolution, since I think the mammalian right ventricle develops by the heart tube folding back on itself rather than as a septal separation of a single ventricle.

Details in Moorman and Christoffels, Physiol Rev 83: 1223–1267 (2003): "Based on the development of trabeculated myocardium, unanimity exists that the right ventricle develops later on in development, downstream and visibly separated from the left ventricle ... These observations indicate that the right ventricle develops from a part of the heart tube, whatever the name of that part, that is downstream from the left ventricle, and argue against development from a common ventricular chamber by septum formation within a single ventricular chamber as occurs in the atrial part of the heart...The signiﬁcance of the above-mentioned description is that it unequivocally demonstrates dorsoventral (inner-outer curvature) patterning. One way to describe these factual observations of the cardiac conﬁguration at the ventricular part of the heart tube is that the looping heart tube is a single compartment or module, from which two additional modules have grown, the embryonic ventricles." (Freely available on PubMed).

On a science point this may be an interesting case of "converging" evolution ...

Oh, I wouldn't be surprised at all (and thanks for the references).

This kind of exercise has nothing to do with ancestry ... it has to do with the silly creationist "argument" that (perhaps most famously) 'what good is half a wing?'

So we show them feathered dinosaurs and do aerodynamic studies that show that feathered arms might be helpful to run up slopes or that Archaeopteryx, even lacking a keel bone to anchor sufficient muscles to power free flight, likely could glide better than "flying" squirrels. Darwin did it 150+ years ago with eye spots and everything between up to the vertebrate eye.

It is a counter to the notion, that the IDers continue to this day, that organisms have to somehow "jump" between "stools," islands" or "buttes" in order to evolve from one 'kind' to another.