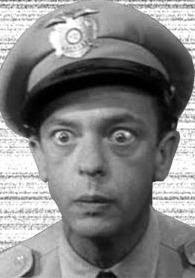 
The Discovery [sic] Institute is getting nervous.

With a small bump from me, Richard B. Hoppe noted at The Panda's Thumb the detailed review Smilodon's Retreat is doing of Stephen Meyer's Darwin's Doubt.

The DI has rushed out a contentless post by Donald McLaughlin (who?) that "objects" that what Richard "leaves out of his post is that 'Smildon' is also a self described atheist and skeptic." In point of fact, Richard linked to Smilodon's "About" page where Smilodon did that "self-describing." More importantly, if ID is a scientific argument and not religious apologetics, why would it matter if he is an atheist and skeptic? Once again , the DI lets the real purpose of ID out of the bag.

I'll be perfectly honest, there isn't anything in this book that shows evolution is wrong or that ID has any supporting evidence. If there was, they would publish and then they wouldn't shut up about it. This is just book to lead the lay-person to the conclusion that science can't explain everything.

That all being said, I will try my best to be scrupulously fair. I will let you, my readers, decide if I'm being fair or biased.

McLaughlin seems to think that stating up front your doubts about the author of the book you are reviewing and inviting the reader to examine the review in that light is somehow a bad thing. Did Meyer start his "review" of Darwin's work by revealing that he is a contributor to Focus on the Family's "TrueU" course "Does God Exist," described as "an apologetics training series" and invite his readers to view his criticism of evolutionary theory in that light? If not, who is the more honest?

The important thing is that Smilodon intends to counter any bias he has by acquiring and reviewing the references Meyer uses, out in the open, where anyone can see.

Also unsurprising is the sneering reference to Smilodon as the "Unknown Scientist" and the "comparison" to "the well-known 'Unknown Comic' from the 1980's."


I can picture "Smildon", sitting in his armchair, bag over his head, reciting his "scrupulously fair" review of Darwin's Doubt.

There is a long tradition in literature of anonymity in criticism. Elia anyone? Or maybe Charles Lamb was the "Unknown Essayist" with a paper bag over his head?

The utterly vapid nature of McLaughlin's post is an early indication of how little the DI has, even in these beginning stages, to counter Smilodon's criticisms and just how nervous they are about what he will reveal about Meyer's book.
Link - Posted by John Pieret @ 6:45 AM

Donald is a 1975 graduate of Taylor University where he earned his BA in Speech and Drama. In 1977, he earned an MA in Clinical Audiology from Ball State University in Muncie, IN.

There's more at the link above, but those seem to be his core qualifications.

Thanks, Richard. I just used that information in my latest post.