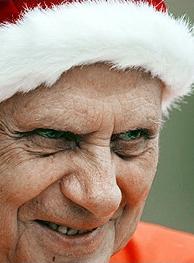 Pope Emeritus Benedict XVI has made his first public statement since resigning the Papacy in February and it's ... interesting.

He made his comments in a letter published by Italy's La Repubblica newspaper on Tuesday. Specifically, it was in response to a book by Piergiorgio Odifreddi, a member of the Italian Union of Rationalist Atheists and Agnostics.

Benedict spends time in the letter denying that he tried to cover up sexual abuse of children by Roman Catholic priests or was otherwise part of the problem rather than the solution. But here's the part where the stomach-wrenching turns to belly laughs:


In response to Odifreddi's 2009 declaration that the church preaches conjecture, not facts, and is therefore "science fiction", Benedict said: "There is, moreover, science fiction in a big way just even within the theory of evolution. The Selfish Gene by Richard Dawkins is a classic example of science fiction."

He added: "The great Jacques Monod wrote the sentences that he has inserted in his work certainly just as science fiction. I quote: 'The emergence of tetrapod vertebrates … draws its origin from the fact that a primitive fish' chose 'to go and explore the land, on which, however, was unable to move except jumping clumsily and thus creating, as a result of a modification of behaviour, the selective pressure due to which would have developed the sturdy limbs of tetrapods'".

I suggest one old fossil should visit another ... by the name of Tiktaalik.
Link - Posted by John Pieret @ 8:15 PM

Comments:
I'm not willing a priori that science and religion are incompatible a priori - I have too much respect for religious scientists. But guys like this ex-pope do their very best to prove it.

So in retirement, Ratzi's coming clean about stuff he only hinted at when his words carried Official Weight.

that science and religion are incompatible a priori

Yeah, I've been arguing with people for years about that. The "incompatiblists" never quite get around to explaining what they mean by it. They usually try to boil it down to epistemology but, outside the creationists and IDers, that's not usually a problem. Then they, like Jerry Coyne, tangle themselves into forays into something like a "scientific worldview," which reduces science (IMHO) to just another metaphysics ... and around and around we go . But then people like Benedict pipe up ...

The only fair procedure is to criticize both of them, maybe on alternate Tuesdays.

So in retirement, Ratzi's coming clean about stuff he only hinted at when his words carried Official Weight.

It was no accident that I used the 'get off my lawn' meme.

Yes, I think JAC shows a remarkable lack of skepticism in this regard (also in another and when I told him repeatedly he banned me - to be honest I told him in a very unkind way). He is a typical example of the danger Richard Feynman warned for:

"The first principle is that you must not fool yourself, and you are the easiest person to fool."
I would like science and religion to be incompatible very much, which exactly is why I distrust the arguments for it. It's quite a claim, so I need to have the arguments foolproof.

Still there is more to say about it. Herman Philipse in God in the Age of Science convincingly shows that the philosophy of science (indeed, the underlying metaphysical assumptions) is incompatible with religion. That's not the same; the option that scientific results can be combined with a belief system without getting contradictory is still open.

Now Darth Ratzi is showing his true colors as a servant of the Dark Side. But remember:

"Always two, there are. No more, no less. A master, and an apprentice."

But which was destroyed, the master or the apprentice?