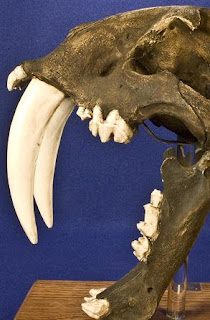 The Discovery Institute crowd have complained that reviewers aren't seriously engaging with the arguments in Stephen Meyer's Darwin's Doubt: The Explosive Origin of Animal Life and the Case for Intelligent Design.

Smilodon's Retreat (a blog by an anonymous scientist ... here's more on Smilodon's qualifications) has begun a review of the book in such detail that he had four posts on the Prologue and three, so far, on Chapter 1.

There are 20 Chapters in the book and, if the poor guy doesn't exhaust himself, the DI drones may get the heebie-jeebies whenever they see that dentition.

As long as I'm here, I'll list some of the other reviews:

John Harshman of talk.origins has technical objections at The Panda's Thumb

Elizabeth Liddle at The Skeptical Zone has "Meyer's Mistake"

Ack! I am remiss! Richard B. Hoppe had this at The Panda's Thumb some time ago: "Stephen Meyer: workin' in the quote mines"

Here's something handy: Darwin's Doubt Critical Reviews, which is aggregating critical reviews of Meyer's book and the underlying work by IDers that Meyer relies on heavily. The site has Charles R. Marshall's review in Science entitled "When Prior Belief Trumps Scholarship."

Comments:
I just began reading the review when I came across this:

I’ll be perfectly honest, there isn’t anything in this book that shows evolution is wrong or that ID has any supporting evidence. If there was, they would publish and then they wouldn’t shut up about it. This is just book to lead the lay-person to the conclusion that science can’t explain everything.

And that agrees with what I saw in Meyer's book. Even if everything he has to say is accurate, he does not support any doubt that humans are part of the common descent of vertebrates by naturalistic evolution over hundreds of millions of years. Nor does the book offer any scenario of what did happen in the Cambrian, for example, what the trilobites came from or how (much less suggest what might count as evidence for a scenario).

You've read the book and I haven't but I gather from Cook's review that Meyer is just making a god-in-the-gaps argument writ as large and vaguely as he can.

Some where, some how, (sotto voce) God did some thing and, therefore, the universe is not utterly indifferent to us and, in turn, we can have a sense of meaning and purpose. Of course, Meyer knows that, from there, most of his audience can fill in the rest of their religious beliefs and never trouble their heads about evolutionary theory ever again.

Isn't there some sort of irony in showing that the designer(s) are not indifferent to us by finding the most sure evidence of design in the trilobites? Not only are they far from humans in time and physiology, they went extinct without descendants long ago.

I was going to quote from "In Memoriam A H H" by Tennyson, but maybe the unintended irony is better found in Whitman:

WHEN I heard the learn’d astronomer;
When the proofs, the figures, were ranged in columns before me;
When I was shown the charts and the diagrams, to add, divide, and measure them;
When I, sitting, heard the astronomer, where he lectured with much applause in the lecture-room,
How soon, unaccountable, I became tired and sick; 5
Till rising and gliding out, I wander’d off by myself,
In the mystical moist night-air, and from time to time,
Look’d up in perfect silence at the stars.

The book’s best, most honest moments come in the concluding chapter, in which Meyer travels to see the famous Burgess Shale in person. His son goes ahead on the trail but then suddenly freezes, stricken with vertigo after peering down the mountainside. Meyer likens his son’s paralysis to modernity’s despair at materialism, its shock at the prospect that the universe is utterly indifferent. Meyer writes frankly, saying that his quest is to give people back their sense of meaning and purpose. Here, at last, Meyer is not pretending to be a scientist.

In other words, in a nutshell, Meyer's book is just another example of apologetics dressed up as science.

ISTM that there is an odd displacement of one's concern about meaninglessness and the indifference of the universe to place the burden on evolutionary biology - or astronomy, for that matter.

If I want to have a special relationship with my Creator and Redeemer, what does it matter to me about the origins of trilobites? I could almost understand if someone objected to reproductive biology or genetics. Those give cold, naturalistic explanations of where I come from. But why worry about some abstraction like Homo sapiens, and events of long, long ago? Not to mention that with all of that loving attention to the design of trilobites, they were allowed to go extinct without descendants.

All good objections Tom, if the intended audience was at all interested in biology. But they are not. All they need is some reason to assure themselves that, no matter what science says, they are special in their relationship to God (even if it is as special pets).

If the trilobites are (even in a vague way) specially created, then they can be certain that they surely are too. And the ick factor of being related to monkeys only comes into play if they are, themselves, monkeys rather than the result of God's lack of imagination in design. In the latter case, they can even laugh at how much chimps look like us when we dress 'em up in human clothes.

This was profoundly stated, TomS. Do you mind if I quote this on my blog?

@Jeremy Mohn:
I would be flattered if you did.
TomS

John, thanks for posting a link to my review. Looking forward to Smilodon's review.

Glad to, John. Maybe you can post a link to Smilodon's review on your blog?

While you are collecting reviews, you might want to look at the one from Elizabeth Liddle

Meyer’s Mistake. There's quite a discussion, with several ID proponents making the same mistake as Meyer.

Thanks Neil, I got it.