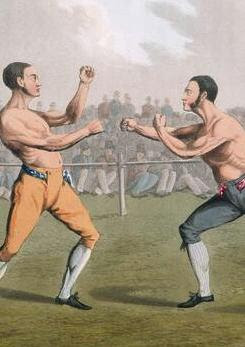 Philosophers are not nice people!


MOSCOW -- An argument in southern Russia over philosopher Immanuel Kant, the author of "Critique of Pure Reason," devolved into pure mayhem when one debater shot the other.

A police spokeswoman in Rostov-on Don, Viktoria Safarova, said two men in their 20s were discussing Kant as they stood in line to buy beer at a small store on Sunday. The discussion deteriorated into a fistfight and one participant pulled out a small nonlethal pistol and fired repeatedly.

The victim was hospitalized with injuries that were not life-threatening. Neither person was identified.

It was not clear which of Kant's ideas may have triggered the violence.

When will we have the pay-per-view of Nagel v. Dennett?
Link - Posted by John Pieret @ 8:53 PM

But no one was, in that case, actually hit, IIRC.