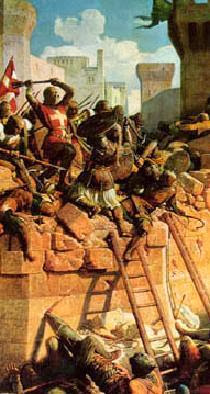 The Discoveryless Institute is crowing about "some open-minded students at the University of California, Irvine, invit[ing] Discovery Institute's Casey Luskin to speak about ID on the campus."

Citing a lack of classroom discourse on intelligent design at the University of California Irvine – a highly regarded scientific research institution – a Christian student group recently brought in a scholar to discuss the merits of the controversial theory, which suggests an intelligence can be found in the blueprints of life.

Of course, "open-minded" and "Christian" are synonymous! ... Just ask any gay person!


"Intelligent design is a valid explanation that should be able to be freely taught on a scientific campus," UC Irvine biomedical engineering major Daryl Arreza, 23, told The College Fix.

Arreza, co-president of Ratio Christi, the Christian apologetics campus group that sponsored the recent talk, said the lecture was needed to expose students to the theory of intelligent design, which is ignored in campus science classes.

"We hope people think, 'How come we don't hear about this in our classes?'" Arreza said.

What's the matter, Mr. Arreza? Aren't you going to Sunday school? Oh, are you expecting a state university to hold Sunday school classes in its science curriculum?

This is kind of fun: "[t]he pro-intelligent design scholar" is, no less, Casey Luskin. Now, we can all think of many epithets for Casey ... but scholar?

Then there is this:


... Lusskin added intelligent design is neither simply a negative argument against evolution, nor is it necessarily an appeal to a supernatural power, such as God.

Of course, you wouldn't necessarily make an appeal to a supernatural power to a Christian apologetics campus group ... Heaven Forfend!

The rest is blather, borrowed, as always, from "Creation Science," such as:


"Common design could be another explanation," [Casey] said. "While human and ape DNA is said to be 99 percent similar, why couldn't the cause of that be a common blueprint, because it is a useful design?"

There is much other silliness but how many times can you beat the grass where a dead horse once peed?

Comments:
... Lusskin added intelligent design is neither simply a negative argument against evolution, nor is it necessarily an appeal to a supernatural power, such as God.

No, of course not. ID theorists only send about 90% of their time sniping at evolution and studiously avoid saying anything at all about the nature of their mysterious designer. That's why it's such a well fleshed out theory

"Intelligent design is a valid explanation"
Daryl Arreza badly needs a course in philosophy of science before he receives any other grade (bar theological ones).

It appears that the Salem Hypothesis holds true even if you stick "biomedical" in front.