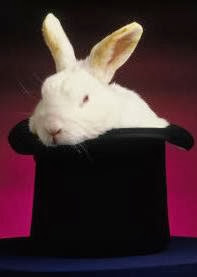 Stephen Meyer, in Darwin's Doubt is (surprise, surprise!) pulling some sleight of hand.

In Chapter 19, he argues against Methodological Naturalism and, in particular, tries to excuse the failure of ID to specify just how their relentlessly unspecified intelligent designer actually achieves its alleged effect on the material world. At page 397 he states:


At present no one has any idea how our thoughts—the decisions and choices that occur in our conscious minds—affect our material brains, nerves, and muscles, going on to instantiate our will in the material world of objects. However, we know that is exactly what our thoughts do. We have no mechanistic explanation for the mystery of consciousness, nor what is called the "mind-body problem"—the enigma of how thought affects the material state of our brains, bodies, and the world that we affect with them. Yet there is no doubt that we can—as the result of events in our conscious minds called decisions or choices—"will into existence" information-rich arrangements of matter or otherwise affect material states in the world.

On the next page, he says:


We do know of a cause that can produce the functional information necessary to build complex systems. But we do not know exactly how mind interfaces with matter. If we were to ask what caused the Rosetta Stone to arise, and then insist despite all evidence to the contrary that a purely material process is capable of producing the information-rich etchings on that stone, we would be deluding ourselves. The information etched into that black slab of igneous rock at the British Museum provides overwhelming evidence that an intelligent agent did cause those inscriptions.

First of all, notice the shift between talking about our present lack of knowledge of how "choices" in our "mind" (which many philosophers and neuroscientists think are, in fact, illusionary) act on the brain, to the assertion that "all evidence" is that our "intelligence" is not "a purely material process."

It's not hard to reach an "inference" to non-materialistic design when you assume it in your premise.

Of course, to use a favorite phrase of the IDers, "we have abundant experience in the present" that, if you physically damage a human brain, a material object, say by putting a bullet in it, the "mind" ceases to interface with matter ... fairly strong evidence that, in humans at least, "mind" is a material process ... unless ghost stories are now part of the "evidence" for ID.

Furthermore, we have good evidence exactly how those letters arose on the Rosetta Stone from the chisel marks and our discovery of the sort of period tools that made them. Humans do not "will" such things into existence, we use fully material means to produce material objects. Where is the evidence of how the designer caused the supposedly sudden change in animal morphology during the Cambrian? If IDers can't specify that, then their whole "analogy" of human design to disembodied design collapses from its lack of correspondence.

P.S. By the way, in that chapter Meyer uses the same quote from Richard Lewontin that the openly creationist plaintiffs in Kansas used in their lawsuit ... showing, once again, that the only thing making ID distinguishable from creationism is that the creationists are (slightly) more honest.
Link - Posted by John Pieret @ 12:38 AM

Comments:
We do have abundant experience that designing something is not sufficient to produce something (other than a design). Rube Goldberg machines and Penrose triangles are designed - they just don't happen to exist.

Ho-hum, another deliberate conflation of "intelligent" with "non-material" (I recall arguments from t.o days along these lines, to do with crime scenes). It takes chutzpah to try and sneak the dualist camel through that needle, but Meyer can count on the fact that much of his audience already (in many cases, naively) assumes something along those lines.

"Where is the evidence of how the designer caused the supposedly sudden change in animal morphology during the Cambrian?"
This is not only an important question for IDers. It's on a more general level important for all religious folks.

"Where is the evidence of how some supernatural entity interacts with our material world?"
If that question is unanswerable it seems reasonable to argue that science and faith are incompatible indeed.

If that question is unanswerable it seems reasonable to argue that science and faith are incompatible indeed.

Oh, I'm willing to allow people their theology, if they are willing to label it as such. "Poof" is a theologically "acceptable" explanation, just not a scientific one.

Now, I suppose, we go on to the question of what "incompatible" means.

There's elbow room enough for a person to accept science and the natural world and still find mystery beyond. I suppose it may be my training as a lawyer but I'm less concerned about the way people think than what they do. Ken Miller practices excellent science and does not intrude his beliefs into that. Whatever he otherwise believes, I can not see as "ncompatible" with science.

Wonderful learn, I simply passed this onto a colleague who was in search of this info. Ive you bookmarked on Digg. http://ariadnetravel.com/

As I used to be a student in class a few, the mum thought I often genuinely must overview The English language previously, and so your lover very well then, i will critique from your category related with educator Ye related with Refreshing Building connected with Beijing. Together with the woman category When I started to review the groundbreaking Principle The English language furthermore to dealt with this sentence framework intended for when. Educator Ye we’ll approach this by mouth The English language, jamming on top of that to publishing.        https://casaparadiso.net