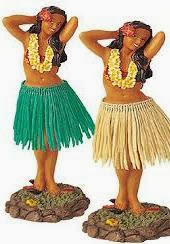 Hawaii just became the 15th state (plus the District of Columbia) that has legalized same-sex marriage:


HONOLULU – Hawaii Gov. Neil Abercrombie signed a bill Wednesday legalizing gay marriage in the state that kicked off a national discussion of the issue more than two decades ago.

Hawaii's pivotal role in the same-sex marriage fight was something that, until recently, I had forgotten:


Hawaii's gay marriage debate began in 1990 when two women applied for a marriage license, leading to a court battle and a 1993 Hawaii Supreme Court decision that said their rights to equal protection were violated by not letting them marry.

That helped lead Congress to pass the federal Defense of Marriage Act in 1996, part of which was struck down earlier this year by the U.S. Supreme Court.


An estimate from a University of Hawaii researcher says gay marriage will boost tourism by $217 million over the next three years, as Hawaii becomes a destination for couples in other states, boosting ceremonies, receptions and honeymoons in the islands.

Congressman Bob McDermott has filed a lawsuit against Abercrombie claiming that same-sex marriage cannot be legalized until a court rules on the meaning of a constitutional amendment passed in 1998 about gay marriage.

The Amendment reads, in its entirety:


The Legislature shall have the power to reserve marriage to opposite-sex couples.

McDermott contends that "the issue of gay marriage needs to return to the people for a vote." He and his fellow travelers have the right to begin again whatever the Hawaiian process is to amend its Constitution but, in the meantime, they don't have a semblance of a legal leg to stand on.

McDermott is merely grandstanding ... possibly to the surprisingly (to me) large population of Mormons in Hawaii (some 5% of the population).

It's very bad of me ... but I can't help but wonder if their magic underwear just isn't up to Utah winters.
Link - Posted by John Pieret @ 9:36 PM

Comments:
The conservative response follows a predictable pattern. When the judges overturn marriage laws as unconstitutional, they cry activist judges and say only the legislature is the legitimate. When the legislatures legalize marriage, they cry that legitimacy only comes from the people. When the referenda pass, well, they just cry.

BTW, as a Utah resident, the 5% LDS population in Hawaii is not surprising. There has been a big missionary effort in the Pacific. Salt Lake City has a surprisingly large community of Hawaiians, Samoans, and Tongans. There is even a ghost town in the west desert (Iosepa, named after Joseph Smith in Hawaiian) that was a failed effort to establish a Pacific Islander community here. And don't forget that Brigham Young University has a Hawaii branch campus.