Happy Thanksgiving ... Unless You're Gay! 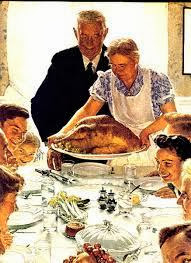 It's that time of year again when Americans celebrate the successful genocide of Native Americans, the eve of Black Friday and the concussions of athletes!

But Peter LaBarbera (or is that LaBarbarian?), of the oxymoronic Americans For Truth About Homosexuality, doesn't want LGBT people to even think they have a right to be thankful that the tide of public opinion about gay rights, particularly in regard to same sex marriage, has turned in their favor.

Thanksgiving, you see, is reserved for "Christians and Bible-respecting Jews." (I guess "Judeo-Christian" is no longer specific enough ... and forget those nasty Muslims, Buddhists, Hindus and, especially, atheists!)

It isn't really worth the time to dissect LaBarbera's foaming-at-the-mouth screed but I did find this bit amusing:


And so, we have come full circle: citizens of a nation founded "under God" use our annual day of gratitude — conceived to humbly give thanks to God — to celebrate sin. ...

[W]e as a nation must repent and return to honoring our motto of being under God if we are to achieve greatness again, and avoid His divine judgment upon us.

Up until the "Red Scare" of the 1950s, one of the nadirs of our democracy ("Have you no sense of decency, sir? At long last, have you left no sense of decency?"), our motto was generally considered to be E pluribus unum, Latin for "Out of many, one."

LGBT people are one group out of the many that make up this country and our Founders, imperfect as they were, at least pointed us towards an ideal that all that multitude would stand equal before the law and be protected in their rights.

It is the LaBarberas of the world that keep us from being as thankful as we should be.
Link - Posted by John Pieret @ 9:23 PM