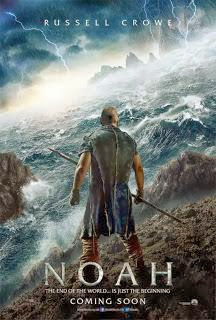 Russell Crowe as Noah and Anthony Hopkins as ... whoever ... how can we not go to watch?

Well, sure. If trailers predicted the worth and marketability of movies, when would there ever be flops?


For myself, I am wary. I've already read two different takes on an early script draft (Brian Godawa's and Peter Chattaway's). Admittedly, they both reviewed early drafts of the script, so the final version is likely to be different, but I am concerned about turning the Noah story into a modern environmentalist fable. The Flood story is pretty grim to begin with (all of humanity wiped out in a single, global catastrophe?), but the notion that humanity must be destroyed because we're bad for the planet? That sounds like the stereotypically worst attitudes that the environmentalist movement has to offer.

But what is this "environmentalist fable" of which Todd speaks?

That we are bad for other species (other than our favorites, rats and cockroaches ... and, maybe, cats and dogs and cattle) is no fable; there can be little doubt of the Holocene extinction. Maybe some people think that is okay because we are given "dominion" over creation but, if we really do have dominion, then we can do other than what we are presently doing.

But I'm glad that a YEC can admit that the "Flood story is pretty grim to begin with." Just think how may abortions God committed by drowning all those pregnant women ... and that doesn't even count the toddlers, who most people wouldn't think of as idolaters and sinners, who were drowned.

But, Todd, I would like to know the names of anyone in the "environmentalist movement" who actually advocates for the destruction of the human species.

After all, they might be as dangerous to society as the YEC God.
Link - Posted by John Pieret @ 7:39 AM

Comments:
I'll wait for it to be on HBO, somesome late Saturday night. if I want to see how they do a comic book, I'd rather see the " Man of Steel "

I'd rather watch "Plan 9 from Outer Space".

I'm afraid that, for me, the story of Noah is inextricably linked to the version in Bill Cosby's monologues.

"How long can you tread water?"