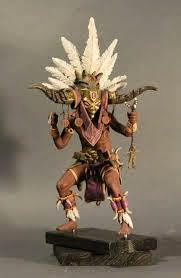 In the coming week a priest will be dressing up in some funny clothes and trying to exorcise evil spirits.


Bishop Thomas Paprocki of the Roman Catholic Diocese of Springfield said he will offer prayers for "exorcism in reparation for the sin of same-sex marriage" at the same time Illinois Gov. Pat Quinn is expected to sign the same-sex marriage bill next week.

Paprocki said he will offer the prayers intended to cast out evil at the Cathedral of the Immaculate Conception in the state's capital Wednesday. ...

An exorcism, which often refers to a rite performed on an individual, is applicable in the case of same-sex marriage because the devil can appear "in various forms of opposition to and persecution of the church," the diocese of Springfield said in statement.

How does that go again? "Those whom the gods wish to destroy they first make mad."
Link - Posted by John Pieret @ 10:37 PM

Comments:
And the churches are wondering why the youth are losing interest.

There's bound to be a blowup between these conservative bishops and the somewhat more open pope Francis.

I would actually go to watch this if it included rattles and bones.

Have any bishops done public, media-reported exorcisms yet over the horrific child abuse which was covered up by bishops in the church?