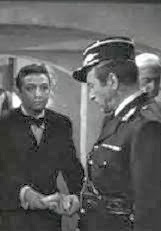 Albert Mohler is shocked, shocked to find that polygamy is going on in here!

It seems that a Federal judge* has:


... ruled late Friday that part of the state's law prohibiting "cohabitation" — the language used in the law to restrict polygamous relationships — violates the First Amendment guarantee of free exercise of religion, as well as constitutional due process. He left standing the state's ability to prohibit multiple marriages "in the literal sense" of having two or more valid marriage licenses.

This is, according to the title of Mohler's article "Moral Mayhem Multiplied."

Of course, the chief villain to Mohler is Justice Kennedy who, as the "swing" vote, thought that gays should not be imprisoned for consensual acts between adults and, since that was the case, we shouldn't have laws otherwise penalizing gays for what some states freely allow them to do. Talk about your moral mayhem ... allowing gays to have actual rights!!!

The funny part is this:

Sex being separated from reproduction is the problem? The suit was brought by Kody Brown, who stars in "Sister Wives," the reality television show, and who, along with his four wives, has 17 children!

** To no one's surprise at all, the real wingnut complaint is contraception. God wants 'em barefoot and pregnant! Strangely, Kody seems to have fallen down on in that regard ... somehow.

Comments:
Tangential to the main point: that's another sighting of a prominent fundy Protestant sounding like a Catholic w.r.t. contraception. This is a new trend -- it was rare 30 years ago, when I was in a position to care.

They copy each other, don't they?