The Curse of Ham 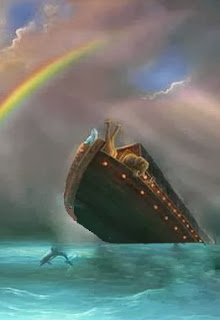 It seems the Curse of Ham is upon us.

Answers in Genesis's Ken Ham is bemoaning the fact that its Ark Encounter theme park is in serious financial trouble. AiG and Ham are faced with the daunting task of selling $29 million in unrated (i.e. "junk") municipal bonds by Feb. 6 or face collapse. Staggeringly, the northern Kentucky city of Williamstown (where Ark Encounter is supposed to be built) in December issued taxable "industrial-development" bonds for affiliates of Answers in Genesis. Even more staggeringly, they have managed to sell $26.5 million of these "securities" (is "a fool and his money are soon parted" from the Bible? If not, it should be!). However, unless they sell at least $55 million in total, a redemption of all the bonds will be triggered.


The [bond] documents cite at least 39 risks to buyers, including that Answers in Genesis has no obligation to back the debt. Bondholders' sole revenue stream would come from money spent by visitors.

Ham takes these developments with all the rationality we have come to expect of him:


As you have read in some of my prior emails, many challenges and road blocks came up as we worked through the stages of the bond offering and the first closing. From atheists attempting to register for the bond offering and disrupting it, to secular bloggers and reporters writing very misleading and inaccurate articles about the bonds, to brokerage firms saying "yes" but after reading these incorrect reports saying "no" in allowing the Ark bonds into their client accounts ...

In other words, giving their clients sound financial advice ...


Several persons directly involved in the Ark bonds process have indicated to us that they have never experienced the level of opposition as we have encountered. It's an indication of the immense spiritual battle we are in, as per Ephesians 6 above ["For we do not wrestle against flesh and blood, but against principalities, against powers, against the rulers of the darkness of this age, against spiritual hosts of wickedness in the heavenly places."].

As I've written to you before, the attacks we have seen on the Ark bond offering have just confirmed for me that the Enemy does not want this project to go ahead. Actually, though, the opposition just encourages me. You see, if we weren't involved in a vital Bible-proclaiming outreach that should have a massive impact on the hearts and lives of countless people, I don't believe we would see this sort of opposition.

Yeah, that's the ticket! Satan made them not do it! And atheists! And secularists! And the main stream media! And Wall Street! (Are there any dog whistles I forgot to blow?)

Comments:
I take it Ken didn't get around to outlining exactly what was inaccurate about the criticism of the bonds?

(Not holding my breath).

Not in the portion of the email revealed by LEO ... which I assume they would have included were it there, if, for no other reason, to make fun of it.

God, apparently, is a wuss.

God, apparently, is a wuss.