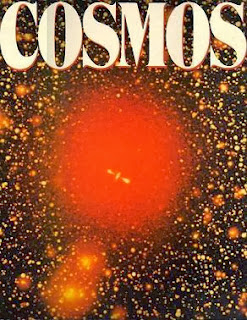 Okay ... nothing Neil deGrasse Tyson or Ann Druyan can do can make those of us old enough to remember watching "Cosmos" forget the impact of Carl Sagan's original.

The special effects are much better than the original and Tyson may (or may not) be able to avoid some of Sagan's ticks ("billyons and billyons") but smooth delivery will never take the place of Sagan's obvious passion for his subject. Not that I think Tyson is any less passionate about science, but glibness and "production values" can mask that.

And the impact of the better special effects is all but destroyed by the cheesy animation of Giordano Bruno's story, especially since the tale of Bruno told, as a supposed hero of science against the darkness of religious dogma, is cardboard "history" at best.

Still, that is only one episode and the "modern" version of Cosmos may turn out better and have more impact on the public than the original.

Comments:
I am reminded of "cardboard history" in the Cosmos Original about the destruction of the Alexandrian Library.

Heh, yeah. The burning of the library by Christian fanatics and the Hypatia story; you're right about that. But at least Carl spared us the animation.

As animation goes, it was good. I mean, you wouldn't want it to look like Toy Story. I thought the message was pretty heavy-handed and a bit muddled.
It's too bad Tyson is all in on the multiverse though.
Wondering if Peter Woit will weigh in on that.

Well, Anon. is right about the destruction of the Alexandrian Library, but not so much about the Hypatia story.

The guy who has created that site is far from a cardboard historian:

Better take him seriously when he writes "She was lynched by a Christian mob in 413/414."

If the reports on Giordano Bruno are correct it's a blunder indeed. For one thing he wasn't much of a scientist.

The url that you gave does not give any information about the Library or Hypatia.

I made no mention of Hypatia.

@Anon: you're right - it was John Pieret.
Look better. I gave the actual quote.

"She was lynched by a Christian mob in 413/414."
First link, about Synesius' correspondents.

S**t - the last anonymous reaction is mine.

Neither is this guy (though he is less than respectful towards "New Atheist" hagiography):

Having now watched the first episode of Cosmos: The Next Generation, I can confirm that the account of Giordano Bruno's life was sketchy to say the least. But what could you expect from trying to cram a whole life into a few minutes of airtime.

Sketchy as it was, it did point out that Bruno was something of an independent thinker from an early age and this was what got him into trouble. His significance to cosmology was that he was one of the first, if not the first, to envisage an infinite universe filled with stars and planets of which the Earth and the Sun were each one amongst many of their kind.

In Tyson's defense, he did point out that the main charges against Bruno concerned his heretical religious beliefs, that he was not a scientist and that his cosmological model could have been as much a product of luck as prescience.

he did point out that the main charges against Bruno concerned his heretical religious beliefs, that he was not a scientist and that his cosmological model could have been as much a product of luck as prescience.

I know. But then the question is why, in a science program, so much time was spent on a non-scientist spouting mysticism who pissed off the authorities enough to get himself killed (an unfortunately common event at the time)? If the last fact was the point, the original's story of Keppler's efforts to prevent his mother from being condemned as a witch is a more cogent and poignant example.

Maybe you prefer this kind of cartoon
http://existentialcomics.com/comic/19

If the last fact was the point, the original's story of Keppler's efforts to prevent his mother from being condemned as a witch is a more cogent and poignant example.

I'm inclined to agree and it would be interesting to know what discussions went on behind-the-scenes about whose story to tell.

Kepler was a great scientist but maybe they felt he wasn't "edgy" enough to appeal to the younger segment of their audience. Bruno was more so and coming to a sticky end, partly of his own making, probably didn't hurt either.

I have fun with, cause I found just what I used to be having a look for.
You have ended my 4 day lengthy hunt! God Bless you
man. Have a great day. Bye

My page Here one Can Get a free version of ccleaner.