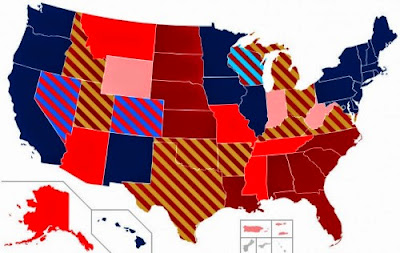 Via PZ Myearshertz, here is a handy (though temporary) map of the state of same-sex marriage in the US.

A majority of Americans live in places where equality counts! Savor that!

The brown and tan stripey bits are where men and women of good will have assaulted the bigotry and spite of the (ever-lessening) resistance to equality but are awaiting further court action to join the 21st Century.

The rest of the colors represent benighted areas of the country that will soon (dog willing) change.

Comments:
I read that here in North Dakota we have the dubious distinction of being the only state which has not yet lifted a ban on same-sex marriage or launched a legal challenge to same, although I also read that a legal challenge may finally be in the offing here.

I saw that too.

I also read that a legal challenge may finally be in the offing here.

Excellent! Though I suppose the ignoratti will make the plaintiffs' lives as close to hell as they can. Good luck to them!

The map seems to owe its origin to Wikipedia, "Same-sex marriage in the United States":