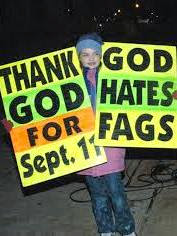 The Southern Baptists are holding a conference, called "The Gospel, Homosexuality and the Future of Marriage."


Speakers at the event said they understood they were on the losing end of the culture war on marriage. ...

"This moral revolution is happening at warp speed," said the Rev. Albert Mohler, president of the Southern Baptist Theological Seminary. "This is a real challenge to us on biblical authority." ...

Mohler, the most prominent Southern Baptist intellectual, said from the stage that he was wrong years ago when he said same-sex attraction could be changed. The Rev. Russell Moore, director of the Southern Baptist's Ethics and Religious Liberty Commission, which organized the conference, drew applause when he condemned anti-gay bullying and called on Christians to address the problem of homelessness for gay and lesbian youth as "a human dignity issue." He said parents shouldn't shun their gay children.

"You've been given a mission of reconciliation," Moore told the audience. "Jesus is not afraid to speak the truth, but Jesus is not shocked by people or disgusted by people."

Even one of the "ex-gays" was down with the program:


... Christians, such as Rosaria Butterfield, who had been attracted to members of the same-sex but say they were now married to someone of the opposite sex or had overcome their attractions ... said evangelicals need to "repent of anti-gay rhetoric" and befriend gays and lesbians instead of trying to "fix" them.

There were, of course, still the hard liners:


Erik Stanley of the Alliance Defending Freedom, the law firm defending Christian business owners and others who refuse to serve gay weddings, said it was a myth that the 1998 murder of Matthew Shepard in Laramie, Wyo., was a hate crime. He argued gays wanted "unfettered sexual liberty" while silencing all dissent.

Sure, tied to that fence, Matthew was trying to silence all dissent of his unfettered sexual liberty.

Still, the fact that Southern Baptists are even talking about this is a sign of two things: 1) they are beginning to recognize that "[e]vangelicals in the millennial generation, ages 18-33, are twice as likely as their elders to support same-sex marriage, according to a survey released in February by the Public Religion Research Institute" and 2) hatred is a poor way to win friends and influence people.
Link - Posted by John Pieret @ 7:25 AM

Comments:
"This moral revolution is happening at warp speed," said the Rev. Albert Mohler, president of the Southern Baptist Theological Seminary. "This is a real challenge to us on biblical authority." ...

Warp speed? That's right, blame it all on the Trekkies now.

As for Biblical authority, they've been happily ignoring that - at least, in the form of Old Testament edicts - for God knows how long .

That's right, blame it all on the Trekkies now.

It all started with that weird guy Spock and all his talk about logic. They don't need no steenkin' logic, theys got the authority!

Thanks for the information, this is very useful. Allow me to share a health article here, which gods are beneficial to us. Thank you :)