Hurrah for Sanity, Duty and Honor! 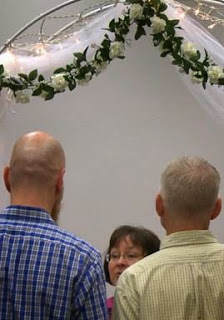 The tide keeps rolling in no matter how many King Canute wannabes there may be out there.

Montana, not having gone the route of seeking a stay, is also beginning same-sex marriages. Here's where it gets particularly interesting to me:


As many as four deputies in the Yellowstone County Clerk of District Court's office have indicated their unwillingness to issue wedding licenses for same-sex couples, and for now they won't have to.

Kristie Lee Boelter, clerk of Yellowstone County District Court, said Friday that one deputy has religious objections. That deputy — and the three others who say they also object — won't be required to issue the licenses, she said. Boelter said that decision was made on direction from county Human Relations Director Dwight Vigness after consulting with the County Attorney's office.

Fortunately, there are sixteen other deputy clerks:


"I have been told," Boelter said, "that I can't require (deputy clerks) to issue licenses. Right now it's not a problem, because we have enough deputy clerks willing to do this."

That doesn't mean Boelter agrees with the directive.

"It is my responsibility to uphold the law and follow the law," Boelter said Friday morning. "My directive to deputy clerks who took the same oath I did is to follow the law or we have issues.

"In my opinion, some of those same religions (objecting to the issuance of marriage licenses to same-sex couples) also disagree with divorce, and yet we deal with many divorce cases in this office," Boelter said. "I don't think that's fair." ...

One deputy clerk, Darryll Broadbrooks, a 57-year-old gay man, said his colleagues' refusal to issue the licenses hurt, "because being gay is who I am." ...

Boelter called Broadbrooks an asset to the office, saying his positive attitude "has given us a needed shot in the arm."

"I rely on a lot of the people I work with. This is my family, and I spend most of my waking hours with these people," Broadbrooks said. "They're people who I thought would be there for me, but now I think maybe some of these people would not be there for me."

"I'm not going to turn around and judge them," Broadbrooks said. "We live in a free country. But I do think marriage equality is a big step forward." ...

"The majority of the staff is supportive of (the judge's) order and are following it," [Boelter] said. "I said to (the deputy clerks), 'Guys, we took an oath. This is what I was elected to do, and we will issue licenses to same-sex couples according to the order.'"

Boelter said she believes "there will be a lot of tension in the office because of this. I would like this to blow over, but I don't think it will.

"If you are going to be in turmoil, this is not the job for you," Boelter said. "You have to be thick-skinned to work in this office. We have cases where children are being abused, where women and men are abused in divorce cases. We need to learn to separate our personal feelings from the job."

Kristie Lee Boelter ... you are my new favorite county clerk and a credit to your profession!
Link - Posted by John Pieret @ 12:42 AM

Thank you very much because you have always shared many new things to us
I am very happy because I can get articles that are very weighty contents
Maybe I will come back to your site. Greetings :)


Al-Tamayoz Al-Janoubi Company for Home Services Cleanliness is one of the most important things that a person must pay attention to in order to protect the public health from the diseases that may affect the person because of the presence of piles of garbage, which may be close to the place of residence. The external environment is polluted and filled with very harmful microbes. The cleaning world is better than the treatment, and we in our company provide all our customers unlimited services, cleaning world, whether cleaning apartments, villas, houses, mosques, public institutions, government, companies, offices, Whatever you want to clean, we provide you with the fullest We have the best trained workers who do all types of cleaning.
شركة تنظيف منازل بخميس مشيط
شركة مكافحة حشرات بخميس مشيط
شركة تنظيف بابها
شركة تنظيف فلل بابها
شركة تنظيف منازل بابها
شركة مكافحة حشرات بابها
التميز الجنوبي