A Guide to How It's Done 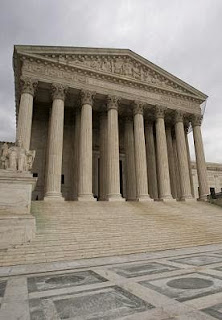 I have argued, certainly, more than a dozen cases before the appellate courts of New York and it's nothing like this. For one thing, very few last more than about 15 minutes for both sides and there is, only in the rarest of cases, any reply by the appellant. The prospect of spending 30 minutes, as Mary Bonauto, the lawyer who will represent the appellants on the main issue, whether the Fourteenth Amendment requires that LGBT people be afforded an equal right to marriage, being peppered by the highest judges in the land (including bright but nasty Justices like Scalia) is simply beyond my comprehension. Worse yet, this is Bonauto's first time arguing before the Supreme Court, I was terrified the first couple of times I argued before the much less intimidating New York courts.

Now it is routine for me and, truth be told, there is no point to the oral arguments. The judges have all made up their minds and it would be a miracle if anything you said changed that. It's more a ritual now than anything.

But your first time before the Supreme Court …!

Fortunately, perhaps, she is a a MacArthur “genius” award winner and may be better equipped than I to take on the challenge.
Link - Posted by John Pieret @ 12:55 AM

Comments:
Do attorneys rehearse their arguments before they appear before the court and try to anticipate and prepare for questions from the bench?

In the Supreme Court, I'm sure they do (as best as possible), with someone asking questions they expect the various Justices to ask. But it is less that they expect anything they say to change the Justices minds, but all about not appearing like dufuses in public reports. In my own appellate arguments, I want to know the case as well as I can but frankly, there isn't such an audience and, therefore, less preparation.

This is one article I've been looking for for a long time
many useful things that I get from the article you have written this.

Thank you, the article is very helpful, hopefully this article is useful for all.