The Confluence of All Cranks 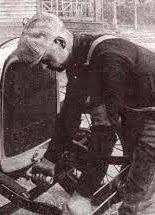 At last, the connection between my two great obsessions … creationism and same-sex marriage!

I bet you didn't know that Darwin, along with engendering Nazism, Communism and just about every other political evil in the world, also is responsible for same-sex marriage!

Fortunately, we have Nancy Pearcey, Discovery Institute fellow, to set us straight:


Secularists claim that their view of same-sex marriage is an expression of respect. But surprisingly, the underlying worldview is actually a disrespectful view of the human body.

In an earlier age, nature was recognized as God's creation, expressing God's purposes. Because our bodies are part of nature, the human body has a purpose too. The biological correspondence between male and female in reproduction is part of the original creation that God pronounced "very good" — morally good — which means it provides a reference point for morality.

What changed this purpose-driven view of nature? Darwin's theory of evolution: It was proposed expressly to eliminate the concept of purpose or design in nature.

This not only changed biology, it also caused a monumental shift in moral thinking. For if nature no longer bore signs of God's good purposes, then it no longer provided a basis for moral truths. Nature was just a machine, churning along by blind, material forces.

The human body too was reduced to a morally neutral mechanism. Our sexual identity no longer provided clues to how we were intended to live. And if nature did not reveal God's will, then it became a morally neutral realm where humans may impose their will and preferences.

This background is crucial for understanding the impact of homosexuality. Think of it this way: Biologically, physiologically, males and females are clearly counterparts to one another. That's how the human sexual and reproductive anatomy is designed.

As a consequence, engaging in homosexual practice requires individuals to contradict their own anatomy — to override the obvious design of their physiology, to act in opposition to their own biology.

The implication is that biology does not matter.

We need to help people see that this is a profoundly disrespectful view of their own body. It treats the body as having no intrinsic purpose or significance — giving no clue to who we are as whole persons. Thus homosexuality has a self-alienating and fragmenting effect on the human personality.

A “disrespectful” view of the human body? What our bodies do is supposed to tell us how we were intended to live? We shouldn't impose our will and preferences on our bodies? We can't override the obvious design of our physiology or act in opposition to our own biology?

Talk about a “self-alienating and fragmenting effect on the human personality”!
Link - Posted by John Pieret @ 1:16 AM

Comments:
Obviously, there is a reason why the human body is designed to be most like the bodies of chimps and other apes, among all of the various forms that life takes, among the infinite possibilities open to God.

We should take that as information given by God about how we should behave.

We should be telling our kids, if they want to fulfill God's purposes, they should act like apes.

Among the many other flaws, isn't she aiming at the wrong target? Wouldn't the mechanistic view of nature be more appropriately attributed to Decartes rather than Darwin?

Please don't tell the creationists about Descartes. They will be demanding to have co-ordinate geometry taken out of schools.

If Nancy Pearcey is so insistent on respect for God's will and purposes, why is she writing about these matters at all?

Let your women keep silence in the churches: for it is not permitted unto them to speak; but they are commanded to be under obedience as also saith the law. And if they will learn any thing, let them ask their husbands at home: for it is a shame for women to speak in the church.

Let the woman learn in silence with all subjection. But I suffer not a woman to teach, nor to usurp authority over the man, but to be in silence. For Adam was first formed, then Eve. And Adam was not deceived, but the woman being deceived was in the transgression. Notwithstanding she shall be saved in childbearing

Perhaps she doesn't feel the need to be respectful to those wishes.