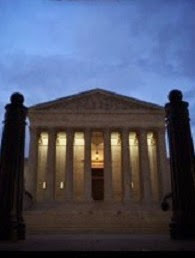 This an expansion on a comment I left over at Ed Brayton's blog. It seems there is a new meme going around the bigotsphere to the effect that, during the oral arguments on Obergefell v. Hodges, Solicitor General Donald B. Verrilli, Jr., on behalf of President Obama, has “declared war” on the religious rights of clergy and churches.


And here is one final thing, Tom, that was scary: that was Don Verrilli, the Solicitor General arguing on behalf of President Obama for gay marriage, and he was asked by one of the Justices 'what about the possibility that pastors will be forced ...forced … against their beliefs to perform same-sex ceremonies and he just casually said 'well, that'll probably be left up to the states, although it is already an issue in states that have gay marriage.' Now think, in the free country of ours, they're casually talking about using the power of the state to force pastors to bless something that the Bible says is an abomination.

And here is Glenn Beck:


“Hear’s (sic) my prediction: If gay marriage goes through the Supreme Court and gay marriage becomes fine and they can put teeth in it – so now they can go after the churches, like the president’s lawyer says – 50% of our churches will fall away. Meaning the congregations, within five years, 50% of the congregants will fall away from their church. Because they won’t be able to take the persecution,” Glenn said. “Because the stigma of going to church will be too much.”

This is a meme we're going to be seeing a lot of in the future, I suspect. What Knight said above is simply not true. You can find the transcript of the oral arguments here. The question about clergy being forced to perform same-sex marriages was asked of the main attorney for the appellants, Mary L. Bonauto, by Justice Scalia and Bonauto, with an assist by Justice Ginsberg, answered “No.” Although it wasn't raised in the oral arguments, there is the “ministerial exception” to anti-discrimination laws on hiring and the same logic would apply to anyone who brought a discrimination claim against clergy for not performing a same-sex marriage.

Verrilli was asked by Justice Roberts:


We have a concession from your friend that clergy will not be required to perform same-sex marriage, but there are going to be harder questions. Would a religious school that has married housing be required to afford such housing to same-sex couples?

Verrilli's answer was rather convoluted and not very clear but basically he said 1) the Court would only be answering what the states have to do under the Fourteenth Amendment, not individuals; 2) the issue would depend on the civil rights laws of the states or local governments [which is where the supporters of same-sex bans and the bigots that voted for them want that decision to be made and where, in any event, the “ministerial exception” would still apply]; 3) the Federal government has no anti-discrimination law covering sexual orientation [and, given our present Congress, isn't likely to have any in the foreseeable future]; 4) such questions are going to arise even if states are allowed to ban same-sex marriages [as in the Houston anti-discrimination law flap in Texas, a state that still doesn't allow same-sex marriages].

… Verrilli said it could be an issue but would depend on what the particular circumstances were.

The answer to Justice Roberts' question is, assuming there is a state or local law forbidding discrimination in hiring based on sexual orientation and assuming that housing is part of the compensation for the job, does the job involve the “ministry” of the school (which can include duties constituting as little a 45 minutes a day of the person's work)? If it is, then the school is protected. If housing is given to, say, a landscaper or a cook who has no interaction with students, then the school might be in violation of the statute. Of course, many, if not most or all, such anti-discrimination laws specifically exempt religious organizations entirely.

So if you see anyone saying that the Obama administration has “declared war” on churches based on the oral arguments, put them down as low-information morons … like Beck and, apparently, Knight.
Link - Posted by John Pieret @ 3:00 PM

Comments:
Re the matter of being forced to solemnize same-sex marriages: Do not churches already have carte blanche to refuse to marry anyone at all, for any reason? Some will only marry members in good standing, others require the couple to attend marriage prep seminars as a condition. Why is this even a question?

While Scalia tried to muddy those waters, I think it is quite clear that no church or clergy need to perform SSMs. There was a case a year or two where a church refused to perform an interracial marriage and no one thought it could be brought up on discrimination charges, despite Loving v. Virginia/

There seems to be an alarmingly virulent strain of paranoia around the country. I was taken aback to see how people were seeing training exercises for special forces in Texas as being preparations for a military takeover of the country by Obama and that he was planning not to leave office in 2016. I can see how the persecution of Christians line will play well to people who think like that.

Didn't Jesus say something like 'the crazies will always be with you'?

In point of fact, the virulent paranoia has been with us all along. Bill Buckley, in one of the better things he did, managed to kick them out of mainstream conservatism and contain them in the likes of the John Birch Society.

In 2007, with the prospect of a black president, the crazies came out in sufficient force in so-called tea parties that the economic wing of the Republican Party thought it could harness them. To call it a Faustian bargain is a great understatement and now they are stuck with them.

But there is nothing new about the paranoia, it was just below the surface before but now it's front and center for all to see.

This news is very interesting.

Thank you for sharing the information

I love all the things you share and see your beautiful creation. Thank you for sharing with everyone.
แม่และเด็ก

Packers And Movers Bangalore : 8:55 AM

Amazing article. Your blog helped me to improve myself in many ways thanks for sharing this kind of wonderful informative blogs in live. I have bookmarked more article from this website. Such a nice blog you are providing ! Kindly Visit Us @ Packers and Movers Kolkata


Superb post, we enjoyed each and everything as per written in your post. Thank you for this informative article because it’s really helpful, I really like site.
Please visit our website: @ Packers and Movers Kolkata

Packers and Movers Bangalore : 1:29 AM

I like this article.I was searching over search engines and found your blog and its really helps thank you so much @ Packers and Movers mumbai

I cannot truly enable but admire your weblog, your weblog is so adorable and great.It has given me courage to try scarier things. I tend to steer clear of them but not anymore. @ Packers and Movers Ahmedabad

Packers And Movers Ahmedabad : 6:19 AM

Packers and Movers in Bangalore : 9:37 AM