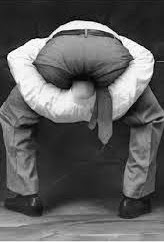 When I was a kid, my family used to vacation in Canada every summer. I always enjoyed the people there who were, as is the stereotype, very polite.

It seems I was wrong, however. They are all monstrous abusers of human rights!

At least that's the case according to Billy Graham's son, Franklin:


Canada began federally mandating same-sex marriage in 2005," Graham wrote on his social media page. "What’s happened since then? One result has been that freedom of speech, press, and religion have suffered greatly.

I'm no expert on Canadian law, but I seriously doubt that Christians are being carted off, en masse to … very polite … concentration camps for saying something nasty about gays. But what do I know?

This, however, is what attracted me to Frankie's screed:


Graham declared that in Canada, "if you say or write anything questioning same-sex marriage, you could face discipline, termination of employment, or prosecution by the government," and warned that if the U.S. Supreme Court legalizes gay marriage, "we will be in the same boat."

Um … no! As much as I like and admire our northern neighbors, they lack a certain thing called the US Constitution. So, if you say or write anything questioning same-sex marriage in the US, you cannot face “prosecution by the government.” And, frankly, I doubt you'd do so in Canada either, but that's another matter.

Now, if you are disciplined or terminated by your employer for being a jackass in the workplace … that's another case altogether! And we have laws in place that protect people from being discriminated against merely because of their religious beliefs.

So what we have is hysteria politics. “When in danger or in doubt, Run in circles, scream and shout.”

The rest of us can and should point and laugh at the people who are risking running up their own asses.
Link - Posted by John Pieret @ 7:10 AM

Comments:
He's probably referring to the hate speech provisions in the Criminal Code (assuming he's referring to anything concrete, rather than just posturing, as seems more likely). As problematic as those are, there does not seem to have been a wave of prosecutions in the past 10 years. Googling "gay marriage canada prosecution" (try it yourself) yields a number of hits, most of which seem to be the same two articles repeated over and over by various Christian sites. They claim "hundreds" of actions (qualified by "it has been reported" -- by whom?), but cite only five actual instances, only one or two of which look like they might have a legitimate beef (firing marriage commissioners for refusing to do their jobs doesn't count).

Yeah, that's what I assumed. While I might disagree with Canadians about having "hate speech" laws in the first place, I'm sure they are not exercising them in such a way as to make freedom of speech, press, and religion suffer greatly, as Graham claims.

Like you, I have serious reservations about "hate speech" laws or any other abridgement of the right to free speech. But while Franklin Graham protests loudly about the prospect of Christians being - very politely - oppressed in Canada I don't remember him protesting at all about the not-so-polite oppression of native peoples in Canada in which Christians played a prominent role.

And about our southern neighbors.

I've been trying to find some information about the Supreme Court of Mexico, and its former Chief Justice, Juan N. Silva Meza.
The SC received a UN Human Rights Prize in 2013, when Silva was CJ, and Silva issued a protocol in August of 2014, which seems to have been worthy of note for what he said about the expansion of human rights. Of course, our own SCOTUS wouldn't dare cite a foreigner's opinion, but I'd like to see if what Silva had to say is important.


Packers and Movers Bangalore as a Services providing company can make all the difference to your ###Home Relocation experience. Bangalore based Company which offers versatile solutions, Right team that easily reduce the stress associated with a ✔✔✔Household Shifting, ***Vehicle Transportation. we help things run smoothly and reduce breakages and offer you seamless, Affordable, Reliable Shifting Services, Compare Shifting Charges . @ Packers And Movers Bangalore

Packers And Movers Bangalore : 3:44 AM