One Shell of an Argument 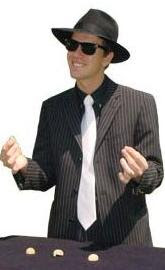 Mark Chu-Carroll has a good post up on Stephen Meyer's smoke and mirrors "evidence" for design ... specifically, Meyer's use of equivocation in the meaning of the term "digital." As Mark points out, there are:

1. Information consisting of a collection of numbers.

2. Information encoded in any discrete form which can be represented by a sequence of symbols.

3. Information which can be stored in the memory of a digital computer.

... [T]hey're using one definition of digital information to claim that DNA is "digital" (definition 1), while using a different definition (definition 3) to argue that the fact that it's digital implies that it's like a computer. ...

Of course, in that sense, lots of things are digital. All chemicals are, in that sense, digital information - because you can describe a chemical by a notation consisting of a series of characters.

Other things that fit the first definition would include a series of coin flips or the structure of snowflakes. Unless the Disco 'Tute is claiming that "the Designer" is controlling the universe to such a fine-grained level (in which case, their disclaimers that the Designer might be extraterrestrials will necessitate John Wilkins eating his epistemological hat), the existence of such "digital information" is no proof of conscious design.

As Mark sums up:

[T]hat's the basic argument that Disco is using: that because we can interpret DNA as something that is, in some sense, "digital", that therefore cells are just like digital computers that process DNA, and that therefore they must be designed. It's the same old argument from incredulity: "I can't imagine how this could have happened without an intelligent agent doing it, therefore it couldn't have happened without an intelligent agent." The only thing that's new here is that they hide that argument behind the word "digital".

The difference between Meyer's argument and Darwin's is in the actual similarity of the compared objects. As Kant (as well as Hume) pointed out, even before William Paley made the watch analogy famous, it fails as such because there are substantial differences between organisms and watches:

We say of nature and its faculty in organised products far too little if we describe it as an analogon of art; for this suggests an artificer (a rational being) external to it. Much rather does it organise itself and its organised products in every species, no doubt after one general pattern but yet with suitable deviations, which self-preservation demands according to circumstances.

Meyer's attempt to analogize the workings of the cell to the workings of a digital computer are nothing more than a superficial update of the watch analogy and fails for the same reason.

Darwin's analogy on the other hand works because he was comparing the effect that certain well-known processes have on living organisms to the effect that his proposed mechanism should logically have on similar organisms if the premises of his mechanism were true. Furthermore, the premises of his proposed mechanism, particularly the inherited similarity of offspring to parent and the culling of the less "fit" through the competition for limited resources, were either observed in the course of artificial breeding or were themselves analogous to the actions of breeders, which is not the case between digital computers and cells. Thus, Darwin's analogy was close at several levels, while the opposite is true of the IDers' attempt at analogy.