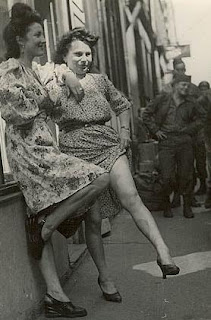 David Klinghoffer has gone from merely being inane to being a sycophant of epic proportions.

One can only hope that Jonathan Wells and David Berlinski had full body condoms available to protect the various body parts that Klinghoffer was trying to insert his tongue in.

Klinghoffer effuses over the Discovery Institute's latest propaganda film, Darwin's Dilemma, too, as if the whole "Darwinism can't explain the Cambrian Explosion" bafflegab was wholly new to him ... which, if true, has to make you wonder just how Klinghoffer can be so confident in his belief in ID, if he is so ignorant of it's arguments that he doesn't already know about one of its oldest claims (and that of its creationist predecessors, for that matter).

But it is Berlinski who Klinghoffer is practically got his nose up the butt of. And if Klinghoffer is reporting it correctly, it is incredibly fatuous stuff he is so enamored of indeed. Take this:

I also loved his insight that the ugliness of the results of the Darwinian idea, its effects on our culture, are far from irrelevant in judging the idea's truth. This is another one of Darwin's dilemmas. Berlinski cited Keats, "'Truth is truth, beauty truth,' -- that is all/ Ye know on earth, and all ye need to know." No, he pointed out, you can't separate the consequences of Darwinian theory from its truth. Beauty may well be an aspect of truth.

Right! ... Poets are who we look to for scientific results ... and we all know that ID is science because the DI has told us so ... over and over again. Even Klinghoffer claims that what "matters to many of us who are involved with [ID] professionally" is the science. But he somehow nonetheless creams in his pants over Berlinski's Argumentum ad Poetica.

And then there's Klinghoffer's lauding of:

... David's very funny riff on how a cow-like creature could take to the seas as a proto-whale, per the Darwinian just-so story, including the challenge of developing nipples that work underwater.

Really! Repeating Duane Gish's lame joke about whales arising from "a cow" being an "udder failure" ... as famously reported by Stephen Jay Gould? Can't these guys even come up with mildly original shtick for their comedy routines? Of course, the animals we think are representative of the basal ancestors of whales aren't very cow-like (taken from Philip D. Gingerich's excellent website): 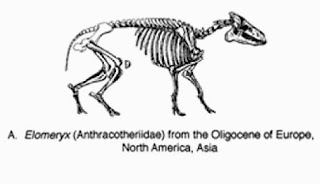 But when have the DI drones let a little thing like accuracy about what science actually says stand in the way of a "good" religious apology? And what's the creationist fascination with mammary glands anyway? Hippopotamuses have tits that work well on land and in water. Where's the big jump?

The word that came to my mind watching [Darwin's Dilemma] was "spooky."

That's hardly surprising ... what with spirits poofing things into existence and all.
.

Comments:
The Keats bit is also a misquote. It should be "Beauty is truth, truth beauty...

You'd think a professional author would check something like that ... if he wasn't an idiot or a hack who didn't care.

But let's be charitable and think it was just a typo.

I tried to correct the excruciatingly bad sentence below, but it's beyond repair.

"But it is Berlinski who Klinghoffer is practically got his nose up the butt of."

If you couldn't "correct" it, it must be right!

If Klinghoffer is impressed by the scientific arguments of poets, than I think he needs to hear in response (from Rabelais, in a poetic moment):