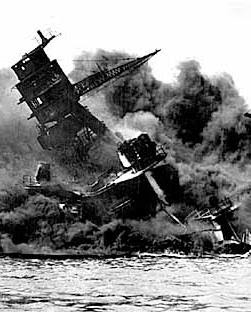 Bruce Chapman, founder of the Discoveryless Institute is desperately dragging fire hoses around the burning hulk of the Louisiana Science Education Act after it received several direct hits from the Livingston Parish school board.

Chapman is over at The American Spectator exhorting the faithful to adopt the DI's subterfuge to sneak creationism into public schools. He begins by reminding them of the DI's claim that only young-Earth creationism is banned from schools:

[I]n Livingston Parish, east of Baton Rouge, some enthusiasts for a literal Biblical account of creation decided that the new law gives them authority to teach creationism -- the account from Genesis. That view clearly violates the law and also the U.S. Constitution as it long has been interpreted.

He then exhorts them not to aid 'the enemy' by admitting what their real intent is:

Reported statements from Livingston school board member David Tate were so fallacious and confrontational that they could have been scripted by his supposed adversaries if they were looking for ways to make him look bad.

Chapman then begins to furiously hand signal the faithful as to how they have to proceed in order to make the subterfuge work:

The [Dover] board members, as in Livingston, Louisiana, were as ignorant of the limits of the scientific case against strict Darwinism as they were of the content of intelligent design theory. The scientists and political scientists at Discovery Institute -- colleagues of mine -- who actually know something about intelligent design, tried to dissuade them, but to no avail. The Dover board members did not believe that a court could stop them. But a central Pennsylvania federal judge, John E. Jones, did stop them.

Where public school districts have been willing to stick to scientific evidence for and against Darwinian theory, and ignore religious implications in the classroom, Darwinian opponents have not sued, let alone sued successfully.

Chapman, of course, doesn't mention that Louisiana is the only place where the "scientific evidence for and against Darwinian theory" ploy has been officially adopted as law and there has yet to be an opportunity for a test case, but the implication is clear (though, unfortunately, for the DI, the Livingston example suggests it isn't clear enough to the faithful), 'if you want to get the religious implications into the classroom, don't say it out loud'!

Darwin's theory of evolution, as its main advocates assert it, presumes that there can be no scientific evidence against a totally unguided and unintelligent course to evolution. Evidence to the contrary is ruled out ahead of time. This causes Darwinists to label practically anyone a "creationist" who refuses to take the standard line. That of course includes young Earth creationists who think the world is only a few thousand years old, but also scholars who make a more limited critique that Darwin's theory cannot account for evidence of purpose and design in nature and the origins of the universe. Even "theistic evolutionists" -- who claim to adopt Darwin's theory, but still see a prior purpose of some kind guiding evolution -- are subject to Darwinian censure if they make that claim too boldly in a classroom.

So let's not be so "bold" and we can still use public schools to teach children that there is scientific evidence for a theistic design and purpose to the world ... and the hell with what scientists think. To make it as explicit as possible, Chapman says:

So shape up, folks!

Someone should explain the facts of life to the Livingston Parish school board.

Comments:
Still, that they apparently put this into a committee and aren't in a rush means they could still argue that - while some board members made creationist remarks - the board as a whole took a long, objective look at the situation before proposing a policy.

If someone on the board got clever, that is.

"Can't someone teach these rubes how to lie?"

The Dover clown show demonstrated that creationists on school boards can lie alright, they just haven't got their timing and consistency down yet. However, I'm sure they won't stop practising it and the Disinformation Institute won't stop coaching from the safety of the sidelines.

... they could still argue that - while some board members made creationist remarks - the board as a whole took a long, objective look at the situation before proposing a policy.

But they're already in a hole with an inference that anything they do is to advance religion. To now make "plan B" work, they'd have to defend the supposed evidence against evolution as being "objective" and without religious motives ... and here's Chapman pointing out the "religious implications" of the "repudiation of Darwinism". Conversely, courts have held that science qua science has no religious implications, no matter what Chapman thinks.

"Long row to hoe" is understating it.

Agreed, but doesn't a reasonable-sounding statement like this one begin to hoe that row?

"Martin said that a number of years ago when the issue came up, he voted against teaching creationism, but not because he didn't want it to be taught.

He said he was concerned about whether teachers would try to introduce their own religious beliefs."

Not advocating any of this BTW, just chewing over the story as it unfolds. :)

... but doesn't a reasonable-sounding statement like this one begin to hoe that row?

Not really. Immediate caveat: as long as SCOTUS doesn't change the rules, which Scalia, at a minimum, wants to.

At the present time, the motives of the school board will be scrutinized by the "reasonable person knowing the relevant facts" test. In other words, would a reasonable person who knew about the many statements made by the board, who are then chastized by the DI and told to just try to "refute" the science in science class, reasonably believe them when they later say they are being objective?

Martin's statement may well hurt the board more than help, not only because he went on to say: "How the subject [creationism] would be taught has been refined since then," but because it would open up the whole issue of whether "strengths and weaknesses" ploy is really just religious objections to science identical in content to ID. That's a can of worms the DI doesn't want opened in any court where the Constitution is taken seriously, so you'll see 'em doing their marine rat imitation again, leaving the board in the lurch and blaming the board members for any bad result.

Interesting. Thanks for analysis sir!

Of the several posts on Chapman's article I've read today, you have far and away the best illustration, John. :)