About to Take a Header 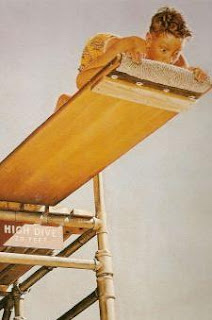 The Giles County (Virginia) School Board has flirted with jumping off the same sort of cliff that the Dover School Board did. This time it isn't about pushing Intelligent Design Creationism in public schools but, rather, the posting of the Ten Commandments.

The district had posted the Commandments after the shootings at Columbine High School and there wasn't any controversy until December 2010, when a complaint was made. The board then took them down at the advice of its attorney. After a public outcry, they were briefly put back up again but then taken down once more.

A local Assistant Commonwealth Attorney, Bobby Lilly, has proposed a Resolution to set up a "presentation of historical documents" that just [cough] happen to include the Ten Commandments. The Resolution is rather long but can be seen in its entirety in the school board's minutes for May 19, 2011. The gist of it is:

RESOLUTION OF GILES COUNTY SCHOOL BOARD FOR POSTING OF HISTORICAL DOCUMENTS

It is recognized by the Board that many documents and symbols, taken as a whole, have special historical significance to our community, our county, and our country’s history. Some of these documents and symbols include, but are not limited to, the idea of equal justice under law as symbolized by Lady Justice; the Bill of Rights to the United States Constitution, the Virginia Statute for Religious Freedom, the Declaration of Independence, the Virginia Declaration of Rights, the Mayflower Compact, the Magna Carta and the Ten Commandments. ...

I suppose we should stop here and contemplate just where in the Ten Commandments the idea of equal justice under law is symbolized. Do you get equal justice if you want to make for yourself an idol (other than an American Idol, that is) and the law stops you or if you take the name of the Lord in vain, because you disagree about just who the "Lord" is, and the law punishes you? Or are equal rights only for those who believe in the Bible?

A sense of historical context, civic duty and responsibility, and a general appreciation and understanding of the law of this land are all desirable components of the education of the youth of the county. We believe these above named documents positively contribute to the educational foundations and moral character of students in our schools. There may be other documents, speeches, letter, and writings which are equally important as those mentioned above, but, it is our opinion, that these above mentioned documents that may instill qualities desirable of the students in our schools, have had particular historical significance in the development of this country.

For all of these reason, BE IT THEREFORE RESOLVED AS FOLLOWS:

1. The Giles County School Board will allow the posting of the above named documents together, in a display in Giles High School and other schools in the district as set forth herein. ... The document display shall also include a brief explanatory document, suitably framed. These historical displays shall be financed by funds of private organizations, and no school funds shall be used for this purpose. No service of school personnel of the school district shall be utilized during any time such employee is employed by the school district and no school employee shall be required to assist in placing the above mentioned documents in any school. ...

2. The display of these historical documents shall be uniform in size and content. No document shall be larger or given any prominence over any other document in the display ...

So far, this is pretty clever in terms of isolating the school board from direct involvement with the display ... except, of course, in choosing the original ones to include, which will likely be the plan's undoing. The "brief explanatory document" is also a possible pitfall.

A potential source of amusement is that the Resolution allows for other documents to be included at public request:

Peppering the school board with requests for inclusion of historical documents the good plain folks of Giles County might not have contemplated, such as, say, the opening of Scriptural and Statistical Views in Favor of Slavery, by Thornton Stringfellow, D.D., which certainly had great effect on our history leading up to the Civil War, should be interesting. Stringfellow said:

Certainly, that's a document of special historical significance that bears on the idea of equal justice under law as it has developed over time in America.

Many other such documents might be suggested and the ones the school board approves -- or not -- might be powerful evidence for -- or against -- its sincerity in creating a truly historical display.

But, of course, the real problem for the school board is the people of Giles County. Besides the local church busing in a hoard of supporters, wearing "Ten Commandment" T-shirts (no "Bill of Rights" or "Virginia Statute for Religious Freedom" T-shirts), the "Keep the Ten Commandments" bumper stickers and the prayers in the halls and meeting room before the meeting, there was the statement in the minutes by the Reverend Shaun Wilburn:

There have been folks that have made comments in regard to not posting the historical documents for fear of perhaps legal action. I appreciate their opinion, but I’m also reminded that without a heritage, every generation starts anew and afresh. We are basically a Christian nation. Proper education teaches that a nation must teach its heritage. ... [O]ur forefathers understood that God was doing something unique in establishing this great country called America ... In regards to avoiding the potential legal fight, if this was a playground scuffle, we would all try to avoid it at all cost, but the fight is bigger than us. We know that this fight has been brought to us by people that don’t even know us. We know that there are those that will participate that want to remain unnamed and don’t want us to know who they even are. There are those who want to deny our heritage and rewrite our history and even as is posted on the national motto on the bulletin board of this building In God We Trust and One Nation under god and all these things that we look at, there are a group of people that want us to pass on a godless heritage. ... Therefore, we understand that’s it’s not merely a scuffle, but a war of perhaps many battles ahead ... For far too long, we have allowed a vocal minority that has yielded [sic] undo [sic] sway in our land and I confess that much to our shame ... June 7th will be the day that we will draw the line in the sand and figure out where we all stand. ... I know that there are some things that you cannot say in a public venue. Our lord taught us that we are to be wise as serpents and harmless as doves. That means don’t tell everything you know and I understand that as well.

I can't imagine a clearer statement of the motives of those pushing for this "historical display" or the basic and widely recognized dishonesty of it as a mere ploy to evade the consequences of violating the Constitution.

What it says about the "morality" that religion instills in believers is another matter.
.

Comments:
How about the Roe v. Wade decision? Maybe someone could nominate that to go up? That's historical.

Vindication of the Rights of Women? The UN Declaration on Human Rights?

Good choices. I thought of the Preamble to the Charter of the UN:

WE THE PEOPLES OF THE UNITED NATIONS DETERMINED

~ to save succeeding generations from the scourge of war, which twice in our lifetime has brought untold sorrow to mankind, and

~ to reaffirm faith in fundamental human rights, in the dignity and worth of the human person, in the equal rights of men and women and of nations large and small, and

~ to establish conditions under which justice and respect for the obligations arising from treaties and other sources of international law can be maintained, and

~ to promote social progress and better standards of life in larger freedom,

AND FOR THESE ENDS

~ to practice tolerance and live together in peace with one another as good neighbours, and

~ to unite our strength to maintain international peace and security, and

~ to ensure, by the acceptance of principles and the institution of methods, that armed force shall not be used, save in the common interest, and

~ to employ international machinery for the promotion of the economic and social advancement of all peoples,

HAVE RESOLVED TO COMBINE OUR EFFORTS TO ACCOMPLISH THESE AIMS

Accordingly, our respective Governments, through representatives assembled in the city of San Francisco, who have exhibited their full powers found to be in good and due form, have agreed to the present Charter of the United Nations and do hereby establish an international organization to be known as the United Nations.

This could be fun. What about, for example:

Millions of innocent men, women and children, since the introduction of Christianity, have been burnt, tortured, fined and imprisoned; yet we have not advanced one inch towards uniformity.

Believing with you that religion is a matter which lies solely between man and his God, that he owes account to none other for his faith or his worship, that the legislative powers of government reach actions only, and not opinions, I contemplate with sovereign reverence that act of the whole American people which declared that their legislature should 'make no law respecting an establishment of religion, or prohibiting the free exercise thereof,' thus building a wall of separation between church and State.

This could be fun.

Not only is there infinite possibilities for amusement but, if we create a record of what the board thinks doesn't "have special historical significance to our community, our county, and our country’s history," it will be clearer that this is all about religion.