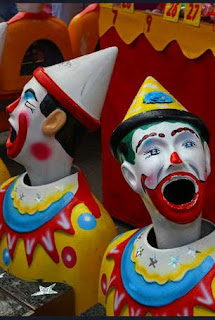 The Occidental Weekly, the student newspaper of Occidental College, has a hilarious account of Orly Taitz's latest foray out of her fantasyland into the reality-based legal world. Her latest hobbyhorse is an attempt to compel the college to release President Barack Obama's college records, including his application.

You may remember Donald Trump's 'election-changing' October surprise, where he offered to donate $5 million to the President's favorite charity if he released all of his college records and applications. No doubt inspired by that ... er ... stroke of genius, Taitz served the college with a motion to compel production of the President's records:


The paperwork was then passed to General Counsel Carl Botterud, who decided to show up in court to present the college's case, and the court hearing occurred shortly afterward.

"I decided that out of abundance of caution, since I wasn't familiar with the judge, that it would be better to show up than not," Botterud said. "It was a 99 percent probability in my estimation that it would go nowhere and get denied."

Botterud called and emailed Taitz to notify her that he would appear in court to oppose the motion.

"It is the college's position that your application is without merit, frivolous, and warrants sanctions," Botterud wrote to Taitz, according to legal filings which included the email correspondence.

Taitz responded forcefully and personally to Botterud in an email that was part of the court filing for the case.

"Your opposition will constitute Obstruction of Justice, Aiding and Abetting in the elections fraud in forgery and treason in allowing a foreign citizen to usurp the U.S. Presidency with an aid of forged IDs and usurp the civil rights of the U.S. citizens," she wrote. "At any rate your opposition and your attempt of intimidation and your allegiance or lack of allegiance to the United States of America is duly noted. Just make sure not to forget to bring with you Mr. Obama's application, registration, and financial aid application."

Well, as long as you're going to be reasonable about it Orly ...


When Botterud arrived in the courtroom, he was approached by Taitz and asked if he had the President's records with him, according to a court observer's report. The report noted that Botterud was "obviously amused," when he replied, "No."

"It was a ridiculous question," Botterud said in an interview with The Occidental Weekly. Botterud did say that the college would comply with any legitimate court order to release any student's information, including President Obama's. In absence of a court order, the college is required to follow privacy laws for all students and alumni that prohibit the release of most student records.

However, the judge agreed with Occidental that the subpoena and motion to compel were riddled with fundamental procedural errors and denied Taitz's motion with prejudice. According to the court observer, Judge Margines did comment on Taitz's quality of evidence when she presented a folder of it to the judge.

"You should know that evidence is not stuff printed from the internet," Margines said ...

Taitz had her usual measured response (caps in original):


THE JUDGE DID NOT GIVE A DAMN ABOUT THIS COUNTRY. HE RULED IN FAVOR OF HIDING THE RECORDS FURTHER, WHICH FROM WHAT I UNDERSTAND, DO NOT EVEN EXIST. SADLY HE IS NOT ANY DIFFERENT FROM ALL THE OTHER JUDGES. I AM YET TO SEE ONE SINGLE JUDGE, WHO GIVES A DAMN ABOUT THIS NATION. I FEEL LIKE I AM IN NAZI GERMANY IN 1930S.

This about sums it up:


Jay Ritt, a friend of Botterud's who was brought on to assist Occidental defend its position, commented on Taitz's legal skills.

"I would like to take credit for a spectacular job preparing papers and going down to the Orange County Superior Court and arguing this case and getting sanctions, but I honestly believe a rhesus monkey could have beaten Ms. Taitz ..."

The upshot: Taitz was ordered to pay $4,000 in sanctions to compensate the college for time and resources spent dealing with the subpoena.

Comments:
Here's what I don't get about Orly Taitz (and the entire birther movement):

When Taitz appeared on the Colbert Report, the endorsed the "both parents born in America" definition of Natural Born Citizen.

So if she believes that, then why bother with his college records? Why bother going through any court system to release any records if Obama is already disqualified from office based on information that no one disputes?

No doubt because she understands, at some level, that that argument isn't going to fly. Anyway, Obama is the wingnuts' boogieman and showing that he "stole" the presidency would be much more emotionally satisfying.

"... I honestly believe a rhesus monkey could have beaten Ms. Taitz ..."

Aw, man, that cost me a keyboard!

You know, there are times when there really is nothing wrong with indulging in a little schadenfreude.

Be sure to take pictures!

Has Ms. Taitz paid any of the sanctions imposed on her? I recall one in the tens of thousands of dollars.

What is the source of her income? Would you trust her with a dental pick or as your legal representative?

While I'm not sure that she has paid them, she was raising money at her blog for the $20,000 sanction that Georgia Federal judge imposed on her and had, IIRC, gotten a good chunk of it. Which just goes to prove the adage "Fools and their money are soon parted."