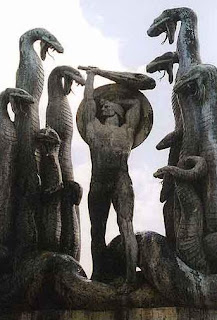 Not long ago, I pointed out that there have been at least four incarnations of anti-evolutionism: "ban evolution in public schools," "equal time for creation science," "Intelligent Design Creationism" and "teach the controversy/academic freedom laws."

As Ed points out, the anti-evolution movement continues to evolve at a very rapid pace, and we may now have a fifth (or sixth, depending on how you count) species. The NCSE is reporting:


The expected antievolution bill in Indiana appears to have mutated. As NCSE previously reported, state senator Dennis Kruse (R-District 14) told the Lafayette Journal and Courier (November 10, 2012) that he planned to introduce a bill drafted by the Discovery Institute, presumably along the lines of the bills enacted in Tennessee in 2012 and Louisiana in 2008, encouraging teachers to misrepresent evolution as controversial. But now the Indianapolis Star (December 4, 2002) reports that Kruse plans "to pursue legislation that allows students to challenge teachers on issues, forcing them to provide evidence to back up their lessons." ...

Describing his new idea as "a different approach," Kruse explained to the Star, "I would call it 'truth in education' to make sure that what is being taught is true ... And if a student thinks something isn't true, then they can question the teacher and the teacher would have to come up with some kind of research to support that what they are teaching is true or not true." He added that the bill would delegate the exact implementation of the process to local school districts: "It's going to be written in kind of a broad way." Although Kruse was not quoted as mentioning evolution in particular, the Star seemed convinced that it was in his sights.

There is a kind of low cunning to the plan. Imagine being a science teacher in an elementary or high school, who probably doesn't have all that much knowledge of biology or evolutionary theory to begin with, outside the text you are teaching from, and who, in most curriculums, is trying to cram the idea of evolution into a week or two of instruction, when you are confronted by a student with something like Jonathan Wells' "Ten questions to ask your biology teacher about evolution."* What do you do? Spend hours out of an already full day trying to track down the answers and provide "research" to support the lesson plan? Or, after being burned once or twice, do you deemphasize evolution of even arrange it so that there is no time to get to that block of instruction.

* Fortunately, there is help for that, if the teacher realizes what the source of the questions are.

Comments:
We had Eugenie Scott here last weekend, to give us a run-down of all the evolving forms of creationist attempts to subvert science education. She even had a couple of slides showing a sort of phylogeny of the various bills over the years; ie. which ones were cribbing the central ideas from which earlier ones. I don't recall whether she mentioned this latest speciation event in IN.

I wonder what kind of language will be used to frame this. Will it be so vague as to allow anything to be asked, like "How do we know that poisons are bad for you?" or "How does dialing 911 connect you to emergency services?" How many people could answer questions like those?

Of course, there are opportunities here if the teacher is smart.

For example, if the students ask questions then they are bound to give the answers a fair hearing. This allows a (well-prepared) teacher to give a lengthy exposition of the scientific evidence to that is in effect a captive audience.

This would also create an interesting dilemma for those parents who don't want their children to hear anything about evolution at all. Presumably they would support the demand to know what is the truth but their refusal liksten to it or allow their children to hear it would expose them to charges of cowardice and hypocrisy.

"You can't handle the truth!"

... there are opportunities here if the teacher is smart.

Yes, that's true. But I was thinking of that survey a while back that showed something like 13% of high school biology teachers are out-and-out creationists who explicitly advocate creationism or intelligent design. Another 60% try to avoid controvery with parents and students in various ways and are not likely to use student's questions as "teachable moments." So, at most, only the very lucky 27% of students with really good biology teachers might be sucked in by trying to take advantage of the law. But they already have good biology teachers and if that isn't enough, chances are, getting caught with their intellectual pants down around their ankles isn't going to change things much.

I remember that study and I agree it makes for somewhat dismal reading. I assume that the 13% of biology teachers who explicitly advocate creationism in class are arguably in breach of the Establishment Clause but who would have standing to call them to account?

but who would have standing to call them to account?

Any student (and parent) who didn't want to have religion forced on him or her in science class. As an employee of the school district, the teacher is a government employee and the district is responsible for any constitutional violation they commit.