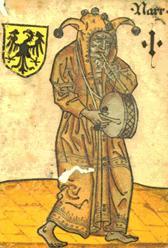 I'm feeling so . . . uh . . . seerish. I predicted we would be hearing more about the television "documentary," Darwin’s Deadly Legacy, produced by D. James Kennedy, of Coral Ridge Ministries, and the apparent attempt by Kennedy to hijack the reputation of Francis Collins, Director of the Human Genome Project, in support of this bit of cardboard history. Further, I predicted that this special would be best suited for simpletons unable to see through misdirection and outright lies.

Lo and behold, Wingnut (opps, WorldNet) Daily has rushed in to let us know that not only was Collins absolutely correct when he denied any involvement in the program (and that Kennedy is absolutely unrepentant for his dishonesty) but that the show is going to be full of logical errors and untruths.

According to the story:

"Dr. Francis Collins has, apparently, disassociated himself with the special," Aman said. "He is not presented as an advocate of the Darwin-Hitler thesis, but in our science section, he is presented as an evolutionist who addresses the question of God and creation."

But that's not quite what Kennedy's press release said:

The program features 14 scholars, scientists, and authors who outline the grim consequences of Darwin’s theory of evolution and show how his theory fueled Hitler’s ovens.

It then goes on to list Collins along with Ann Coulter, Lee Strobel, Jonathan Wells, Phillip Johnson, Michael Behe, Ian Taylor, author of In the Minds of Men and Richard Weikart, author of From Darwin to Hitler, without a mention of his different "role" in this propaganda piece.

The article goes on at great length about how PZ Myers at Pharyngula was "offering stinging criticism of those on the show," including Collins but that, once "Collins explained that he had been interviewed by Coral Ridge about his book, and the taping was inserted into the program without his advance knowledge," PZ only offered "a half-hearted apology." I'll leave it to the reader to go to PZ's site and determine how "hearted" his apology was (PZ hardly needs me to defend him and, anyway, everyone can use the improvement that comes from perusing his excellent blog). What is conspicuously absent from the WorldNet article is any mention of the complete lack of an apology (half-hearted or otherwise) from Kennedy to Collins for dishonestly dragging his name into this dishonest project.

And what a project it is! Here are some quotes from the article which presumably represent the very best of the arguments the program can muster:

Jerry Newcomb, producer of the program, "said before Darwin, the basic concept was that man was made in the image of God, and was therefore valuable. But Darwin changed all that." I suppose, if you count those Southern Baptists and other Christians who thought other human beings were so "valuable" that they set up a little trade in them, while spouting justifications for slavery from their Bibles, you could say that. But it takes a special kind of chutzpah to say it with a straight face.

Coulter is quoted as saying that Hitler simply was taking Darwinism from the theoretical to the practical:

He thought the Aryans were the fittest and he was just hurrying natural selection along.

Uh, Ann . . . that's artificial selection, not evolution. You know, animal breeding! That was around for a little while before Darwin and its use on humans goes back as far as Sparta, at least. Trying to lay the blame on Darwin, who never supported anything beyond "positive eugenics" (offering incentives for the "right" sort of people to breed . . . rather like Fundamentalists do, promising heavenly rewards for "going forth and populating the Earth") is more than a little disingenuous.

Nor is it true that "Darwin led to eugenics, which led directly to Hitler" as Newcomb asserts. That is simpleton history of the "A happened and B happened, therefore A caused B" variety that is justly recognized as a logical fallacy. Much of the time that German militarism, the real fuel the Nazi movement, was developing came during the "Eclipse of Darwinism." The same can also be said of the rise of negative eugenics.

Finally, trying to take advantage of the Columbine tragedy shows the real moral center of Kennedy, which is in the gutter. Troubled teenagers are hardly a phenomenon that only arose after Darwin. That those particular tormented youths chose selection as the metaphor for their angst is more chance than anything.

They might just as well have adopted "Kill them all, God will know his own."
____________________
.
P.S. The Anti-Defamation League has come out with a blistering attack on Kennedy and his "wrongfully using Collins as part of its twisted documentary, 'Darwin's Deadly Legacy'." ADL National Director Abraham H. Foxman went on to say:

This is an outrageous and shoddy attempt by D. James Kennedy to trivialize the horrors of the Holocaust. Hitler did not need Darwin to devise his heinous plan to exterminate the Jewish people. Trivializing the Holocaust comes from either ignorance at best or, at worst, a mendacious attempt to score political points in the culture war on the backs of six million Jewish victims and others who died at the hands of the Nazis.

Collins himself is quoted as saying that he is:

And they claim that Darwin is bad for children's morals! More on this can be found at Pharyngula.