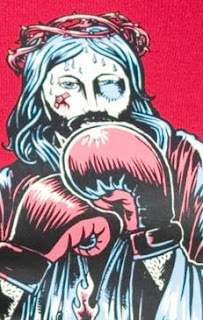 Heh! Remember the Christians who are afraid of yoga?

I wonder what they'd think of this:

If you were a cynical 12-year-old boy like I was, then the words Mighty Morphin' Power Rangers will bring to mind bitter thoughts of cheesy dialogue, bright spandex uniforms, and choreographed live-action anime fight scenes, all overdubbed and irritatingly formulaic. ...

In February the New York Times published R.M. Schneiderman's article "Flock Is Now a Fight Team in Some Ministries" about the "growing number of evangelical churches that have embraced mixed martial arts—a sport with a reputation for violence and blood that combines kickboxing, wrestling, and other fighting styles—to reach and convert young men, whose church attendance has been persistently low."

Now how does that go again? ... "whosoever shall smite thee on thy right cheek, turn to him the other also ... but then get him with an uppercut!"
.
Link - Posted by John Pieret @ 6:57 PM

Comments:
Someone actually said "live-action anime"? That's a contradiction in terms. "Anime" is Japanese animation, unless you're in Japan, in which case it's simply a loan word meaning, well, animation (whether produced by Japanese or not). The Japanese word he's looking for is "tokusatsu."

Churches are desperately trying to attract and keep men in their congregations. This is just another of many gimmicks they've tried over the years.