Why Can't We All Just Get Along? 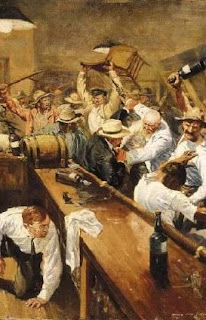 First it was David Klinghoffer calling Andrew Breitbart a 'potty-mouthed crazy-con' and one of Breitbart's minions calling Klinghoffer a creationist and purveyor of 'sanctimonious rants.'

Then Joseph Farah, editor and chief executive officer of WingNutDaily, decided that Ann Coulter was a proponent of materialistic libertarianism because she agreed to speak at an event held by a gay Republican group, GOProud. Coulter called Farah a "swine," for releasing what she considered a private email exchange. Then she upped the ante by calling Farah a "publicity whore" and a "fake Christian."

And now, Bryan Fischer, spokesman for the American Family Association, has weighed in with claims Coulter and Glenn Beck are not being sufficiently homophobic, calling them "the latest deserters in the culture war." He calls Coulter a 'Benedict Arnold impersonator.'

I am so distressed by the falling out among the Loony Right that I may have to take to my fainting couch until the vapors pass.
.
Link - Posted by John Pieret @ 9:36 PM

Comments:
Why, they're getting positively shrill!

Right that I may have to take to my fainting couch until the vapors pass.

Is it true that Michael Steele will be replaced by Linda McMahon, who will bring Republican interviews up to Wrestling standards?

Ah, DM is back. I was worried that the staff at the sanitorium had cut off his access to computers. How would the dialogue among the loony right ever improve without his calm and reasoned contributions?

With friends like these who needs...no, that's not quite right either...