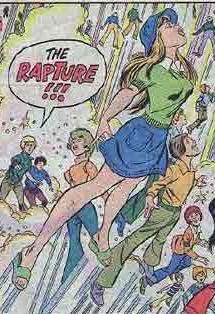 I've already touched on Harold Camping's prediction that Christ will return on May 21, 2011, setting off a terrible series of disasters culminating in the destruction of the Earth -- indeed, the entire universe -- on October 21, 2011.

Well the fun is about to start!

One side or the other -- the sane and sober among us or the crazy loons (pick which you think is which) -- are going to enjoy much merriment come May 22nd.

But, as I noted in my last post on the subject, there is a sad side to this that may not be evident, as in the case of the young unemployed woman who put up $1,200 to take out a bus stop ad and had put her life on hold for 10 months -- eschewing such things as getting married, having a kid, traveling more -- because of Camping's biblionumerology. Even if Camping is right (snort!), that's a waste of precious life.

"Knowing the date of the end of the world changes all your future plans," says 27-year-old Adrienne Martinez.

... She and her husband, Joel, lived and worked in New York City. But a year ago, they decided they wanted to spend their remaining time on Earth with their infant daughter.

"My mentality was, why are we going to work for more money? It just seemed kind of greedy to me. And unnecessary," she says.

And so, her husband adds, "God just made it possible — he opened doors. He allowed us to quit our jobs, and we just moved, and here we are."

Now they are in Orlando, in a rented house, passing out tracts and reading the Bible. Their daughter is 2 years old, and their second child is due in June. Joel says they're spending the last of their savings. They don't see a need for one more dollar. ...

"We budgeted everything so that, on May 21, we won't have anything left," Adrienne adds.

One has to wonder if the Martinez' don't own a calendar or if they think that babies will be born in Heaven. Be that as it may, one has to be concerned about the child and/or children of parents who won't even consider the consequences of their being wrong.

Maybe atheists could set up a service like this -- which rescues and cares for the pets of the raptured -- only in reverse, to care for the children of those who are wrong about the rapture.
.
Link - Posted by John Pieret @ 4:41 PM

Comments:
Yesterday, I passed a convoy of no less than four large RVs, each covered in professional-looking (and, presumably, expensive) graphics announcing the end of the world on May 21st. I was tempted to stop and ask if they would mind me taking over one of the vehicles after they were finished with it but, alas, they were going the other way and I didn't have the time.