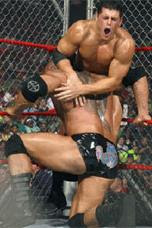 That's actually an old story, going back a couple of years.

PZ is also amazed by Dembski's answer to how "evil" (like animals eating each other) could precede the Fall ... namely, "[t]he effects of the Fall work backward through time." Been there. Done that. Have the T-shirt.

PZ then notes Ken Ham's ire at Dembski and Hanegraaff and says:

[P]ut 'em in a cage match and let them tear each other apart.

A little late there too, as Dembski has already been forced to recant his rather mild statement that "Noah's flood, though presented as a global event, is probably best understood as historically rooted in a local event."

There's a rather sad aspect to Dembski's capitulation on this point.

As Dembski says on Hanegraaff's program:

When you have to rationalize something away, you have a problem.

Comments:
I've never been able to decide whether Dembski recanted in order to preserve his job at the seminary or whether he was confirming his actual beliefs which would imply his work on intelligent design was the sham some suspected it to be.

In the first case, if he did it for the sake of his wife and family, then I agree it was sad, but to his credit, in a sense, that he was prepared to sacrifice so much to support them. The reaction of some sections of the so-called Christian community hardly does them credit, however, as you say.

In the end, it merely serves to confirm the low opinion I have of the Southern Baptist church and my contempt for the likes of Ken Ham.

Noah's flood a global event in the Bible?

Wouldn't that mean that the Earth was a globe in the Bible?

A little late there too, as Dembski has already been forced to recant his rather mild statement that "Noah's flood, though presented as a global event, is probably best understood as historically rooted in a local event."

Sure, but that's part of not sinking to our pathetic level of detail.

They fight for the freedom to avoid the messiness of science and its pickiness about "evidence."

And the Wedge Document always pointed out that freedom means killing off evidence-based science and "to replace it with a science consonant with Christian and theistic convictions."

Capitulating on the Flood is consonant with those goals, certainly.

Capitulating on the Flood is consonant with those goals, certainly.

At the very least, it demonstrates how scientific questions will be resolved if they ever get that science consonant with Christian and theistic convictions they so [cough] devoutly desire.