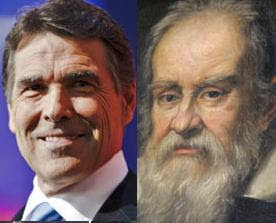 [T]he science [of climate change] is not settled on this. The idea that we would put Americans' economy at jeopardy based on scientific theory that's not settled yet, to me is just nonsense. I tell somebody: "Just because you have a group of scientists that stood up and said, this is the fact" … Galileo got outvoted for a spell. But the fact is, to put America's economic future in jeopardy, asking us to cut back in areas that would have monstrous economic impact on this country, is not good economics, and I will suggest to you is not necessarily good science. Find out what the science truly is before you put the American economy in jeopardy.

- Gov. Rick Perry at a debate of Republican presidential candidates

A man does not attain the status of Galileo merely because he is persecuted; he must also be right.

It might also be suggested that a man does not find out what the science truly is at upscale hair salons or at the knee of fanatical Religious Right donors.

But to really put down American politicians, trust a Brit:

They're both victims of persecution though … In a way, yes. Galileo was put on trial by the Roman Inquisition and sentenced to house arrest for almost 10 years until his death, while Perry has been plagued by pesky scientists wielding facts.

Facts? Considered a form of psychological abuse by some on the Christian right. ...

Goodness. How can we tell them apart? Poke one. The one that responds is Perry. Probably.

Comments:
I'd forgotten how Galileo spent his time lobbying that the government "teach the controversy" and let the grammar-school children decide for themselves. Rather than refining his theories and doing experiments.

Find out what the science truly is before you put the American economy in jeopardy.
Irony meter goes sproing.

Scientists are always providing reasons, as in "We know the Earth is getting warmer because..."
At the debate, Perry also said he has no use for reasons. Also, it would appear, for the ability to reason.

I prefer this version:

"Alas, to wear the mantle of Galileo it is not enough that you be persecuted by an unkind establishment, you must also be right." Robert Park

Of course, what I'd prefer is a world where Rick Perry could never aspire to anything higher than what he really is, a carny barker.

I prefer this version

Yeah, I thought of using that, but SJG has more name recognition when going up against a politician.