The Milk of Religious Kindness 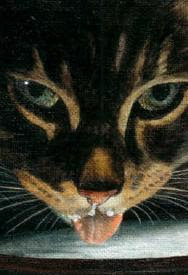 As noted, the Giles County (Virginia) School Board has been sued by the ACLU over its insistence on displaying the Ten Commandment in its schools under the micro-angstrom veneer of a supposedly "historical display."

The ACLU has made a motion to require that the names of the student and his/her parent remain anonymous (under the designation "DOE 1, by Doe 1's next friend and parent, DOE 2"). As exhibits to the motion, the ACLU has included emails it has received, as well as comments from the Roanoke Times Newspaper website.

Here is a sampling:

Dear sir,
I just want to tell you, after hearing your comments on WSLS-10 tonight regarding the Giles Co. School situation, Satan is very proud of you for doing what you're doing. You're accomplishing a great deal for his kingdom! You go, and get those awful "10 Commandments" away from those kids! Make sure they're not indoctrinated with those horrible things like "do not kill" and "do not steal", and especially "honor your Father and your Mother"! We wouldn't want them exposed to ANY of that rubbish now would we? Keep up the good work, you'll have a special place in Hell.

Umm ... what about those other things like "I am the Lord thy God," and "Thou shalt have no other gods before me," and, perhaps most importantly from a constitutional perspective, "I the Lord thy God am a jealous God, visiting the iniquity of the fathers upon the children unto the third and fourth generation of them that hate me"?

Amusingly, the Supreme Court has already addressed this in Stone v. Graham, a 1980 decision concerning a Kentucky statute requiring the posting of a copy of the Ten Commandments (purchased with private contributions) on the wall of each public school classroom in the State. As the Court said:

The preeminent purpose for posting the Ten Commandments on schoolroom walls is plainly religious in nature. The Ten Commandments are undeniably a sacred text in the Jewish and Christian faiths, and no legislative recitation of a supposed secular purpose can blind us to that fact. The Commandments do not confine themselves to arguably secular matters, such as honoring one's parents, killing or murder, adultery, stealing, false witness, and covetousness. ... Rather, the first part of the Commandments concerns the religious duties of believers: worshipping the Lord God alone, avoiding idolatry, not using the Lord's name in vain, and observing the Sabbath Day.

If all the proponents of Giles County's action want is to tell kids that killing and stealing are bad and "honoring" parents is good, why is wrapping it up in a religious text necessary?

In such a beautiful world that God has created for us, why does there have to be a minute group of oxy morons [sic] who try to dictate to those of us who maintain our strong beliefs? We don't dictate to you because your path is clear. Continue on my friends. Perhaps one day there may be a plane that travels to "you know where" and ! would gladly buy each of you a one way ticket!

Leave the people of Giles County alone. They are not bothering you so take a ride to where somebody wants you, perhaps...."you know where!"

As the song goes, Stand Up, Stand Up for Jesus!

Please slither back under your rocks! May God Bless!

Well, the "people of Giles County" includes the plaintiffs in this case and the government is dictating to them that their tax money will be used to impose other peoples' strong beliefs on them. Why is that okay? But that "Please slither back under your rocks! May God Bless!" is a nice touch, I have to admit.

But even better is this:

Your position is nothing more than an atheist position. Back off the Giles County schools.

Why must you always get involved in these matters when there is nothing that concerns you all.

It is our GOD that allowed you to be on this earth. You realize that our Lord is watching all that your group is doing to his name in these matters.

One day when you are near your end days, I can only hope that you pray and ask GOD for his forgiveness.

For now, I will pray that the one day comes sooner for you all rather than later. Let our prays be answered dear Lord.

If your God exists, do you suppose he/she/it is watching while you pray that someone dies sooner than later?

Then there is this from a woman who is a teacher at the Eastern Comb School in Giles County:

Did we have teachers who couldn't spell even simple words back then? If I thought it would do any good, I'd pray for your students.

Some of the newspaper comments:

I think it is a shame that out of thousands of people 350 of them find it offensive to see "Love thy father and mother" and "Thou shalt not steal" posted somewhere that our children will see it daily. That is what is wrong with this world now, people trying to impose their beliefs on everybody else. Isn't that what America is about? I am totally behind the school board in placing these "commandments" back where my son can be reminded daily of the true values that are so important in these times that we live in now. If people don't want to see them, don't read them!!!

Surely this is the irony meter destruction leader! If you want your son to see the Ten Commandments every day, why not put them up in his room or on your front door? Why insist on imposing them on everyone else's children and make them close their eyes if they don't want to see them? Or maybe that's what he means by "what America is about."

Maybe we should ship these "families" overseas to play in the sand with al-Quaida [sic] for a little while ... maybe then, they would seek God's word!

Naturally, it is really in the best tradition of America to deport anyone who disagrees with us ...

Of course, there are even more direct methods:

Sure sounds to me like non-Christians ought to move out of Giles County before things get ugly over there.

There is a long tradition of how to deal with the uppity!

Besides strongly supporting the need to protect the plaintiffs in this case, these expressions are also evidence that the fig leaf of calling the display "historical" is just a disingenuous attempt to evade the law.

Under the "Endorsement Test" of the constitutionality of government speech, first proposed by Justice Sandra Day O'Connor, the issue is whether the school board's action creates a perception in the mind of a reasonable observer that the government is endorsing religion or conveys, in Justice O'Connor's words, "a message to non-adherents that they are outsiders, not full members of the political community, and an accompanying message to adherents that they are insiders, favored members of the political community."

While none of the people quoted above could remotely be called "reasonable," it is clear that their perception is that the school board has, all along, been endorsing religion -- and a rather narrow, sectarian religion at that -- and that anyone who disagrees is an outsider and not a full member of the political community, unlike those who feel they are entitled to denigrate, deport or do even worse to those who don't share their beliefs.
.

Comments:
'You've got to remember that these are just simple farmers. These are people of the land. The common clay of the new South. You know... morons.'

It is an ill wind indeed that blows no lawyer any good, but I'm feeling a bit sorry for whatever lawyer has the misfortune to have the Giles County school board as their client. Unless, of course, that lawyer went to 'Liberty' 'University' 'Law' 'School' or is angling for a job with the Thomas More Law Center.

I'm feeling a bit sorry for whatever lawyer has the misfortune to have the Giles County school board as their client. Unless, of course, that lawyer went to 'Liberty' 'University' 'Law' 'School' or is angling for a job with the Thomas More Law Center.

No tears necessary. The board is being represented by Liberty Counsel itself and the worst lawyer in America, Mathew D. Staver!

In one way, I have sympathy for these people. They're probably decent enough personally, but if you look at the statistics, they're also probably being hurt disproportionally by the downturn and the longer term trend of globalization. And the modern media environment brings the worst ills of the world right into their home. They're too suspicious or closed minded to look for new answers and the traditional ones they turn to are only a placebo.
Sure, post the ten commandments. But first, define the specific goal you hope to accomplish and tell me how we honestly measure those results.
And then, when those goals aren't achieved, be willing jot admit this wasn't successful and be ready to try new ideas.
Not going to happen, of course.

@John
Is there a particular reason for the title you chose? (i.e. you use the word "religious" kindness)

Is there a particular reason for the title you chose?

Some, but don't make too much of it. I was just thinking how some Xnians seem to forget the Golden Rule.

One wonders just what part of "the separation of church and state" they don't understand (or don't want to understand).

Many of these people realize that posting the Ten Commandments amounts to an endorsement of specific religious doctrines -- that's precisely why they want them posted.

Conceivably they don't realize that a public school is, by its very nature, part of the state, but that seems unlikely.

The best I can think of is that they don't think that "the separation of church and state" applies to themselves.

@John
Some, but don't make too much of it.
Now where's the fun in that?

I was just thinking how some Xnians seem to forget the Golden Rule.
Oh that's easy, I(fundie Xian) want to see Xian stuff everywhere so per the golden rule - so should I make you.

This information is very useful. thank you for sharing. and I will also share information about health through the website

You can write an article very much. Thank you for making a great article to read.
Sa gaming สมัคร