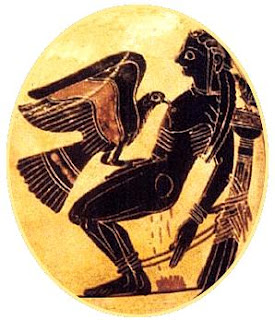 The so-called "science" in the movie is reportedly execrable.

But this is the funniest "justification" for ID since David Klinghoffer's "argument" that religion is good because it provides the same sort of "enchantment" that Klinghoffer's eight year old son gets from Dungeons & Dragons.

Besides the fact that Prometheus has no more science content than ID, the supposed "lesson" is that "The sure sign of a scientist with guts and integrity -- whether in fiction or real life? A willingness to follow the evidence, wherever it may point."

What evidence? Besides recycling long-discredited creationist bafflegab against evolution (which would not be evidence for ID), all the IDers offer is an analogy to human design that Willaim Paley at least had the intellectual integrity to call Natural Theology. Here is Stephen C. Meyer, DI honcho:


Based upon our uniform and repeated experience, we know of only one type of cause that produces irreducibly complex systems, namely, intelligence.

Based upon our uniform and repeated experience, we know of only one type of cause that produces irreducibly complex systems, namely, human intelligence.

The conclusion is obvious. Evolution was guided at crucial points by humans with time machines.

Actually, they have, as Judge Jones noted, gone that far in their attempts to subvert the Constitution.

But nobody, incuding the DI, takes that seriously.