Risen from the Dead ... Again! 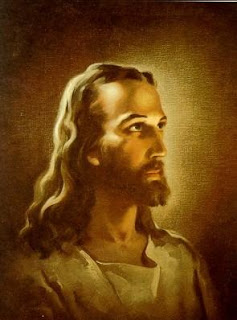 The Jackson (Ohio) Middle School has a copy of Warner Sallman's well-known bit of treacle entitled "Head of Christ" hanging in its main staircase since 1947.

The Freedom From Religion Foundation wrote to the school superintendent demanding that the painting be removed as an unconstitutional government endorsement of Christianity.

So far, the school is being defiant:


Superintendent Phil Howard told the crowd at Jackson High School that "we're not violating the law and the picture is legal because it has historical significance. It hasn't hurt anyone." ...

Howard earlier told Chillicothe radio station WKKJ that it would take a court order to remove the picture and said that the painting is permissible because it was provided by a student club and is displayed among other pictures in a "hall of honor."

"I'm certainly not going to run down there and take the picture down because some group from Madison, Wis., who knows nothing about the culture of our community or why the picture is even there, wants me to take it down," Howard told WKKJ.

Why does that sound familiar? ... Oh, yeah ... Bridgeport (West Virginia) High School. Things didn't turn out too well there. That's especially the case since the Sixth Circuit Court of Appeals, which covers Ohio, has already decided, in Washegesic v. Bloomingdale Public Schools, that the display of that painting in a public school violates the First Amendment.

As to it being displayed in a "hall of honor," that doesn't wash. As can be seen from this picture of Howard and the painting, Jesus is given a very prominent position compared to the other "honorees." 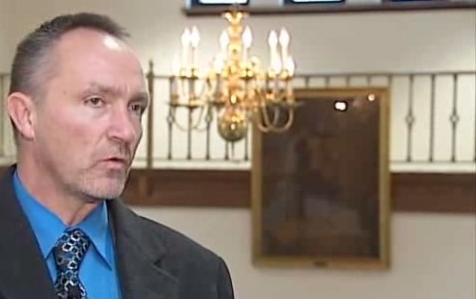 In any event, in order to dilute the endorsement of Christianity, there would have, at a minimum, to be equally prominent displays of the images of other religious figures, such as Moses, Buddha, Mohammed, etc. I'm willing to bet that there aren't any.

And "culture of our community" is just another way to say "the local majority." But the very purpose of the First Amendment is to prevent the imposition of the beliefs of the majority on minorities.

As to the picture being donated by students, the school might want to consult Jessica ("Evil Little Thing") Ahlquist about how well that flies.


[Jennifer Atzberger, senior staff attorney for the ACLU] says the ACLU has not had any direct contact with anyone connected to the school and the letter is the organization's only planned involvement at this time.

"For us to take any further action, we would need to have an individual client," said Atzberger.

In other words, the school district is hoping that no one with "standing" will agree to become a plaintiff in any case brought to remove the painting. As has often been documented, the first thing that "good Christians" do when their hegemony is challenged is to try to intimidate those who will not bow to their will.

It's a good thing that nails and crosses are now generally frowned on ... for the time being.

Al Horus Home Services Company is the best company in the fields of cleaning and pest control and the transfer of furniture and cleaning of reservoirs and services necessary for the whole house, Al-Horus has the best workers in the world and the best materials and equipment in the world, so this is what distinguishes us from others
شركه نقل اثاث وعفش بالطائف
افضل شركه تنظيف بالطائف
شركه مكافحة حشرات بالطائف
شركه رش مبيدات بالطائف