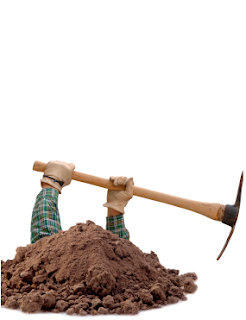 You've heard the adage “When you're in a hole, stop digging.”

When we last left the Taz, she had been ordered by Federal District Court Judge Andrew J. Guilford to show cause in writing why she should not be sanctioned for lying to the Court.

She had already pissed the judge off by, as he described it, acting “extremely unprofessionally in this Court of the United States of America by rolling her eyes and exhibiting gestures of contempt” when he wouldn't let her launch into yet another of her frequent tirades against all and sundry who are remotely involved in her delusions. Her opponent, and equally deranged birther, Philip Berg, has also exasperated the judge and he had previously order the parties, in preparation of his stated intention to end the madness in his court, to inform the Court immediately of any actions taken on pending ethical, disciplinary, or related matters concerning any of the parties now appearing in this case.

Orly told the judge that she didn't have any pending matters but Berg disagreed. When I last wrote about this, it wasn't clear whether Berg's allegation concerned the state court sanctions Orly got for abuse of process in her attempt to subpoena Occidental College's records on President Obama or something else. Now Orly has responded to the charge and, in fact, it is the Occidental case that is the crux of the matter.

Orly insists that the costs imposed are not sanctions but that, instead, “the award of $4,000 by Judge Marginis was for discovery, that it was indeed a cost shifting of attorneys fees related to discovery” under California Code of Civil Procedure Section 1987.2. The only problem is that the relevant portion of Section 1987.2 reads:


[T]he court may in its discretion award the amount of the reasonable expenses incurred in making or opposing the motion, including reasonable attorney's fees, if the court finds the motion was made or opposed in bad faith or without substantial justification or that one or more of the requirements of the subpoena was oppressive.

Frankly, the only way I can see Orly avoiding another major sanction is if Judge Guilford decides to show mercy on someone too stupid to understand the law. I'm not betting on it however.